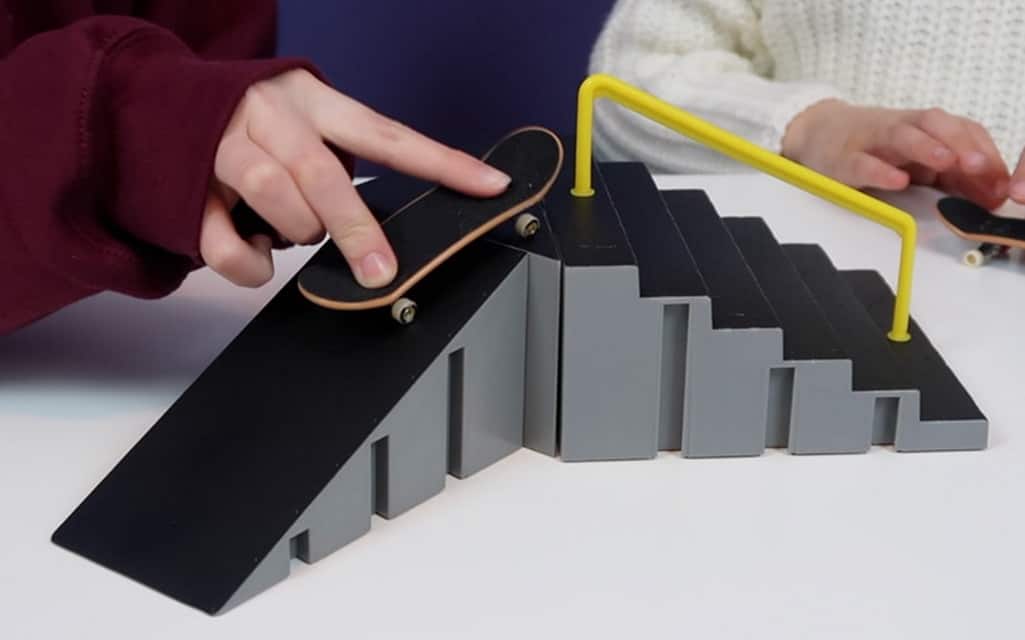 A fingerboard is a working replica of a skateboard that an individual can ride with their fingers. A fingerboard is generally 100 millimeters long, and its width ranges from 26mm to 55mm. Fingerboard first existed as a finger toy and later became a novelty attached to key chains in skate shops. The fingerboard is a fun game, and there are lots of cool fingerboard tricks you can learn right now. Whether you are a pro or a novice who is curious to know how to finger skate, the following tech deck tricks come in extremely handy-

The ollie is one of the easiest tech deck skateboard tricks to learn, and it is also the base for almost every trick you will learn. Thus, the ollie is the first professional fingerboard trick you should master if you perform even the easiest tricks.

The nollie can also be called a “switch ollie,” because it is the contrary of a nollie. Although nollie is the equivalent of an ollie, instead of jumping the board up with your back finger on the tail, you are jumping the board up with your forefinger on the nose. It would be best to understand the ollie before determining how to do nollie, but the nollie is another key trick that needs to be learned to implement many exceptional tricks. Keep reading to learn how to nollie a fingerboard.

The fakie ollie is the equivalent hand skateboard trick as the ollie, and some may claim it’s a little easier.

The only distinction is that the direction the board is rolling. By now, you should’ve learned the ollie. If you have, read on, and you’ll have no difficulty adding the fakie ollie to your bag of tricks.

Ollie turns are difficult on fingerboards. The 360 is the highest level of turn that you can get that simulates skateboarding.

Wrist and arm position is the key, as you must face your hand to start the trick. Unless you pop this trick the same as a 180, bend your wrist and middle finger at the end.

Once you’re above 360, you actually can’t rotate your wrist around those multiple times. That said, here are the steps for a 360 finger skating trick.

After the Ollie 360, it’s difficult to any greater degree ollie spins on a fingerboard. Our arms just don’t turn like that.

Instead, in the fingerboard, we let the board do the spinning. Higher degree rotations are normally done on slopes and are flicked much like 360 flips or push-ups, but with more air and a more solid flick, you can get more further rotation.

It would help if you began with the necessary tricks till you had learned all of the fundamentals. Then, take your time to learn every trick, and once you have learned all of these methods, you can try joining additional rotations, turns, and riding switch or fakie. Finally, make sure that you save this ultimate fingerboard ability and trick list so you can continuously come back to discover new tricks to acquire.