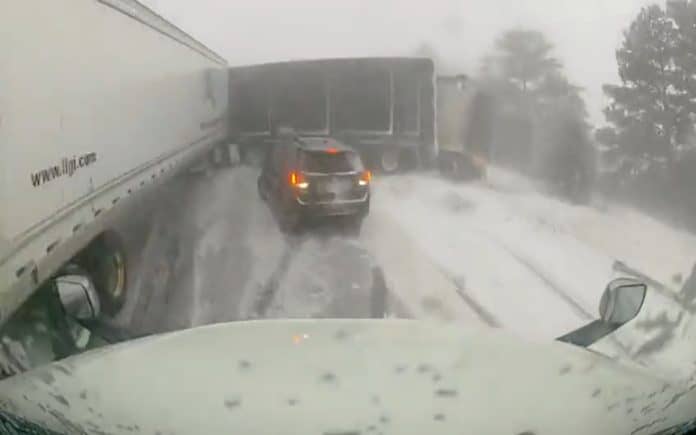 An intense snowstorm in the US state of Ohio caused a devastating series of car and truck collisions, resulting in three fatalities among at least 46 vehicles.

The Ohio State Highway Patrol verified that a minimum of 46 vehicles collided on the Ohio Turnpike Friday afternoon, creating an immense amount of chaos.

Wow. A 100 car pileup amid blizzard conditions on highway 401 just outside of Toronto. A dash cam captured one of the collisions. Crazy. pic.twitter.com/pUCF4IEvWs

According to the American “Fox” network, 3 souls tragically lost their lives at the accident site and many more were left injured.

According to the Ohio Highway Patrol, several surrounding counties joined forces in a unified effort for the rescue operations. Those affected by the tremendous collision were taken to a local center where they could warm up and receive assistance.

The authorities declared that “weather impacted the accident” and implored people to stay off the roads, as snow can reduce visibility significantly.

Dramatic videos show the scene of a deadly pileup on the Ohio Turnpike that involved approximately 50 vehicles during snowy conditions.

And in the event that someone had to drive in such circumstances, the authorities stressed the need to “take some precautions, such as driving slowly, being patient, increasing the distance between cars, and wearing seat belts.”

Governor Mike DeWine of Ohio expressed his profound condolences to the families who endured a devastating loss during the inclement weather.

Since the storm started, at least 4 Ohioans have perished in weather-associated automobile collisions, according to a statement.