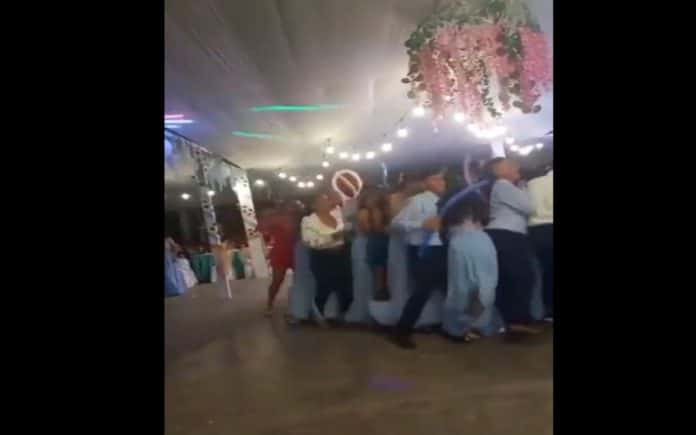 A high school graduation party in Peru turned into a disaster after the dance floor collapsed with dozens of teenage revelers on board, causing panic while at least 29 people sustained various injuries as a result of the sudden fall.

Scenes showed the moment the dance floor collapsed, and the footage of the “underground dance scene” garnered 4.2 million viewers on the TikTok application.

Foreign media said that the footage dates back to December 17, 2022, when the “fiasco” caused injuries to teenagers celebrating their high school graduation in San Martin.

A graduation party in #Peru has turned into chaos after the dance floor #collapsed under teenage revelers, creating a scene of the apocalypse. Those involved were transported to the #Emergency room.There are only minor injuries.

In the video clip, which received widespread interaction on social media, the elegantly dressed students can be seen moving in a huddle in the middle of the dance floor.

But soon they found themselves in a blink of an eye huddled together under the ground, and had fallen into a hole the size of the dance floor, into which they fell en masse, while dust covered the air.

The audience rushed towards the high school students celebrating their graduation in order to save them, while the music stopped, while someone was directing the students out of the mouth of the hole.

It is still not clear why the dance floor collapsed, but Peruvian media reported that the floor was made of wood and could not support all that weight that was above it.

The accident did not cause any deaths among the students, but many of them sustained various injuries.

A Peru takeoff crash saw a truck collide with a plane...