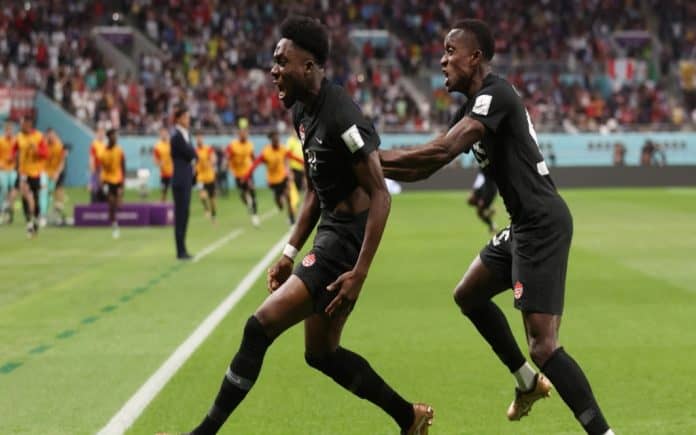 Alphonso Davies, Canadian and Bayern Munich fullback, made history by becoming the first player to score a goal in the World Cup finals for Canada.

The second round of Group E for the group stage played at Khalifa International Stadium, with Canada and Croatia as the participants.

In the less than two minutes that had passed since the start of the match, Tagon Buchanan sent a cross into the penalty area. Davis reacted quickly, raising his head to send it hard into the net.

THE FIRST GOAL EVER SCORED AT THE WORLD CUP FOR CANADA: ALPHONSO DAVIES! 🇨🇦#FIFAWorldCup pic.twitter.com/0t3iLwtCvk

Davis became the fastest goal scorer in the 22nd edition of the FIFA World Cup Qatar 2022, which will continue until December 18, 2022.

This is also the first goal for Canada in the World Cup, which came after five matches

Davies made up for his missed penalty kick in the last match, which caused Canada to lose with Belgium at Ahmed Bin Ali Stadium.

The Canadian national team has only ever participated in the World Cup finals once, and that was during the 1986 Mexico World Cup.

The Canadian national team played in Group C with France, Hungary, and the Soviet Union.

Canada was unsuccessful in all three matches and did not score any goal.

Canada was defeated by France in the first match of the World Cup in Mexico with a clean goal, before suffering two other losses against Hungary and the Soviet Union. The three matches took place on June 1, 6 and 9 1986.

Davies’ goal, which came after 68 seconds, is the fastest goal in the group stage of the World Cup since American Clint Dempsey’s goal against Ghana in 2014.

Dempsey scored Ghana’s goal in the World Cup only 29 seconds into their first round of the group stage.

Also, player Atiba Hutchinson has now played 100 international matches with the Canadian national team- making him the first player to reach this number.