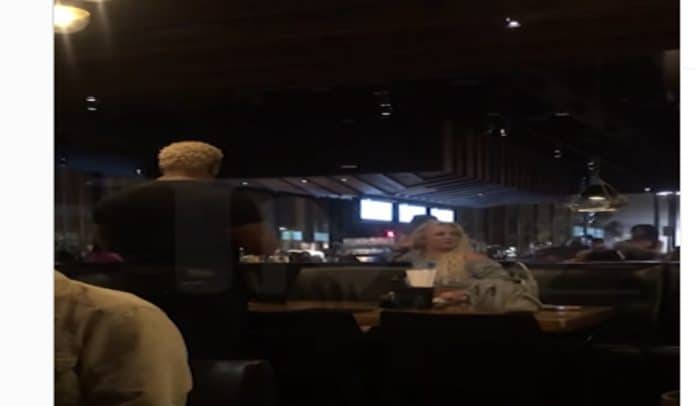 Britney Spears was dominated by a state of acute nervousness that reached the point of madness, in a restaurant, spoiling the moments of her dinner with her husband, Sam Asgari, which prompted him to leave the place and leave her alone, according to a report issued by TMZ

Britney Spears, 41, was having dinner with her husband, Sam Asgari, at Joey’s in Woodland Hills, California, on Friday. And as soon as those in the restaurant recognized her, mobile phones began to climb up to take some pictures of the star and video clips. This behavior caused the pop icon to harass, raise her voice and chatter unintelligibly to a restaurant employee, a person who witnessed the incident at the restaurant told TMZ.

In a video obtained by the outlet, Spears can be seen holding the menu to obscure her face from the camera. While the sources claim that Asgari, 28, was clearly disturbed by what Spears did, and suddenly left her and left the place. Just two minutes later, Spears walked out with her bodyguard, who then came back to pay the bill.

Britney Spears and her mental health

Britney Spears has had a very complicated life, breakups like last Friday’s may be more common than anyone thinks. The pop singer has been suffering from mental health issues for many years due to the abuse she received from her father . She was under a conservatorship that denied her access to the money she made for nearly two decades.

In recent years, she finally mustered the courage to stand up to her father and get rid of the guardianship through legal means. Although this left a huge rift between her and her family, Britney could finally say she felt like a free woman.

Spears has publicly struggled with mental health issues. She was reportedly diagnosed with bipolar disorder. She has spoken out on social media and in court about allegations that she is being held in a mental health facility against her will and being forced to take medication.

Despite the difficulties she faced, Spears and Asghari tied the knot in June 2022 in a fairytale wedding at the Grammy winner’s home in California with famous guests including Paris Hilton , Selena Gomez, Drew Barrymore, Madonna and more.