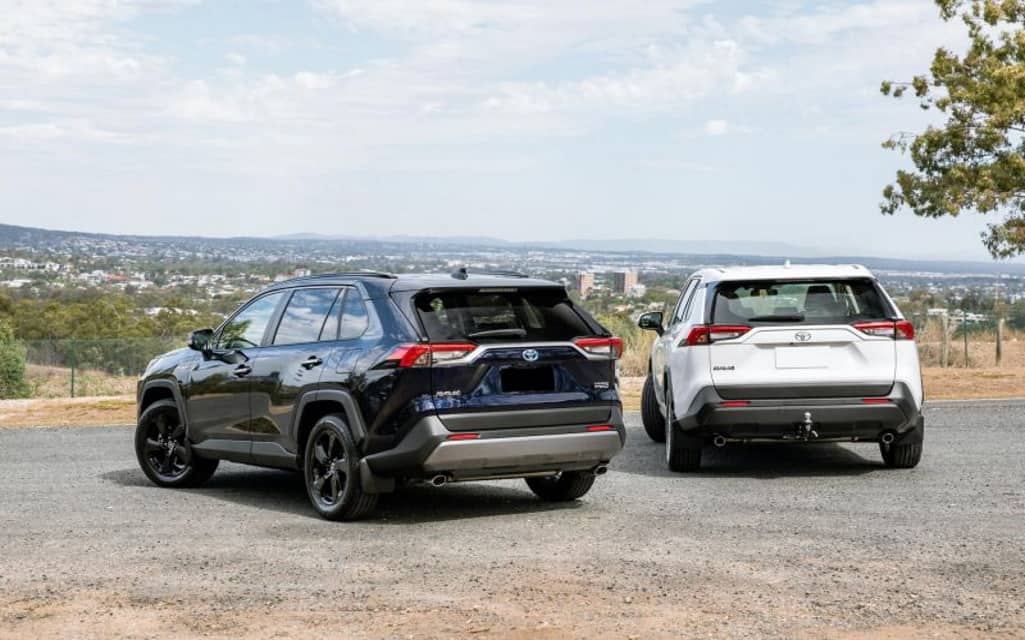 It is beyond question that one of the greatest strengths of Toyota is its hybrid technology. In fact, when it comes to its SUV-obsessed market, the RAV4 Hybrid has already taken over the Toyota Prius as the best-selling hybrid in the auto company’s lineup—which is not surprising at all, considering all the pros that come with buying the Toyota RAV4 Hybrid. Better fuel economy, smoother powertrain, muscular looks—it has just about everything you want in an SUV!

But with the advent of a plug-in version of the Toyota RAV4 called the RAV4 Prime, it’s interesting to see how this newcomer lives up to the buzz around it and outshines the reigning king. After all, it won’t be called the crown jewel of Toyota’s SUV lineup unless it’s really something, right? This SUV is said to be more powerful and more fuel efficient than the Toyota Hybrid, plus it is capable of delivering an amazing electric range!

Let’s compare them based on their performance.

It’s hard to consider the Toyota RAV4 as sporty, but the auto company created the Toyota RAV4 Prime to focus heavily on performance. If you take a glimpse of what’s underneath its sheet metal, you will find that the RAV4 Prime actually has a lot in common with the RAV4 Hybrid—it also uses the same 2.5-liter four-cylinder gas engine, albeit tuned to a marginally higher output. But what gives it more horsepower than the regular RAV4 Hybrid is its new lithium-ion battery pack, coupled with more powerful motor generators and booster/converter. And would you believe that a small crossover like the 2021 Toyota RAV4 Prime can produce up to 302 hp? That’s much more juice than any of its kind out there!

How is it on the road?

It’s obvious that the 2021 Toyota RAV4 Prime has a more powerful engine than the Hybrid, but how does it fare on the road?

Well, Prime has three different electric modes. If you are on auto/HV mode, you will notice that the engine kicks on to deliver extra power when you need it, such as when you hit the gas pedal. But if you use the EV priority mode, your vehicle will run solely on electric power, even when you try to aggressively use the accelerator. The third mode is the battery charge mode, which lets your Prime use engine power to recharge the battery while adding EV range as you go along.

Now let’s compare it to the Toyota Hybrid. Obviously, acceleration is slower if you use electric power only. According to Toyota, it can run a 0-60 mph time of 9.2 seconds in pure EV mode—a way far cry from the Hybrid mode that lets your vehicle run at 60 mph in just 5.7 seconds, no matter your charge state.

Just like the RAV4 Hybrid though, RAV4 Prime can accelerate in a smooth and linear fashion after a halt. You may notice a few extra horses, but you won’t feel it to be significantly more powerful from a halt than the Hybrid. When you’re on the freeway, you will love how quick the Hybrid’s gas engine jumps in with just an extra kick when you need to switch lanes—although you will most likely hear a noisy groan as you do that.

With the RAV4 Prime, your gas engine can jump in just as quick but its improved suspension lets you enjoy a smoother ride as it massages out tiny bumps well enough to give you that seamless drive even on difficult surfaces! Add that to its recalibrated steering system and you have a vehicle you can take anywhere!

If there’s one weak point you’ll probably notice with the Toyota RAV4 Prime, it’s how it suffers a squashy brake you won’t experience in traditionally powered vehicles. Its brakes also take a longer time to bite down completely, although it’s something you will surely get used to over some time.

Read More: 5 Car Manufacturers That Sit on Top of the Market and Why

The Best Smart Cars Offered by the Sandown Group