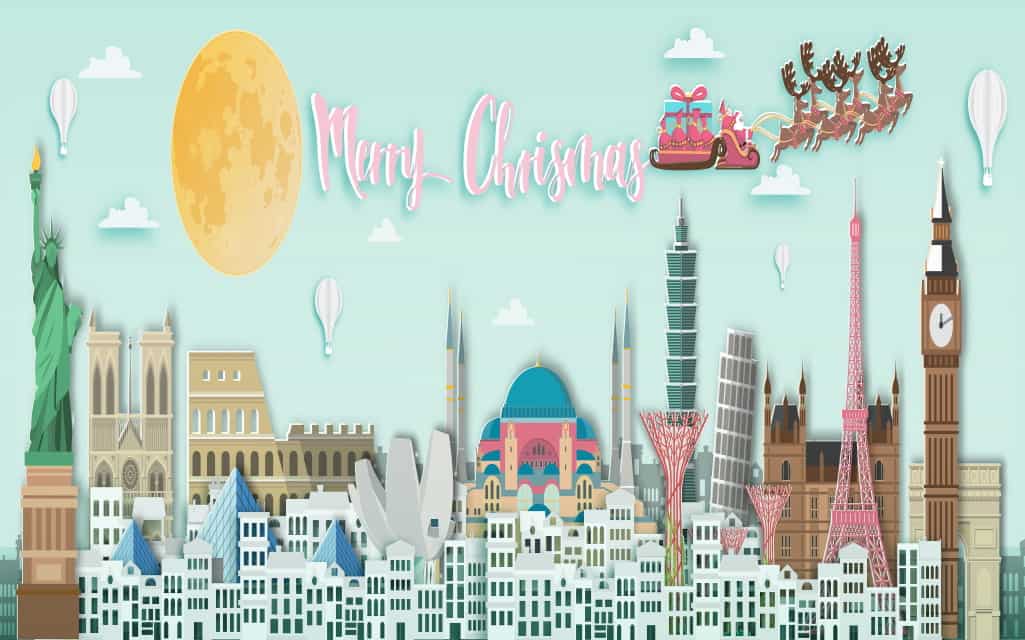 With the holiday season fast approaching, all around the world people are getting ready to celebrate Christmas. From the Krampus to KFC and the pooping log of Catalonia, in this article, My Baggage cover a few of the most unique festive traditions from around the world.

Forget the naughty or nice list, in Germany and Austria if you’re naughty you have the Krampus to deal with. This demonic creature is St Nicholas’ evil counterpart, made from half-goat and half-demon. He roams towns and villages punishing kids who don’t behave. If this tale isn’t terrifying enough on the first week of December it is a popular tradition for men to dress up as the scary Krampus and frighten kids into behaving.

Norway has an unusual tradition that goes back centuries. The story goes that Christmas Eve was when witches and evil spirits came out to play, so households hid their brooms to stop them being stolen and ridden off into the night. Many families still follow this tradition and hide their brooms before they go to sleep on Christmas Eve.

In the town of Gavle in Sweden, a 13-metre-high goat is built every year and resides in the centre square. It was originally built to represent the advent but unfortunately has inspired a completely different tradition of people trying to set it on fire. The goat has been set alight 29 times in the past 42 years it has been erected, it has also been hit by a car and nearly been kidnapped. The last time it was burnt down was in 2016. The town of Gavle has set up a webcam you can view online, so you can see how the goat fares this year. It opens on December 1st and you can find out more about it here.

In Catalonia, there is a unique Christmas tradition like no other. From the 8th of December, every household has a Tio de Nadal, also known as the Cago Tio or the pooping log. This quirky character is a hollow log with legs and a colourful face. Families then proceed to feed the log by placing sweets or chocolates in its mouth. On Christmas Eve everyone then gathers around the Cago Tio and hits it with sticks for encouragement. The log then poops out the sweets and chocolates from its other end.

But that’s not the only toilet themed Christmas character. Nativity scenes are popular in Spain, but in Catalonia, you might find an extra person in the stable. The El Caganer is a figure of a peasant, wearing the traditional Catalonian berretina who is squatting down and going to the toilet. The origin of this mysterious tradition isn’t known but it has been a tradition in Catalonia since the 18th century. You can also find similar figures across Spain in Murcia, Andorra and Valencia and in Southern France, Italy and some regions of Portugal.

Spending Christmas in Japan? Forget the traditional Christmas dinner, here it’s all about KFC. The food chain has managed to become a Christmas holiday tradition and every year they create their own festive menu. If you want to eat in on Christmas Day, you’ll have to reserve a table as the restaurant will always be packed out.

Christmas is a big deal to Filipinos, and they are famed for celebrating the holiday longer than anywhere else in the world. The country gets in the Christmas spirit from September 1st and continues with the celebrations until January 6th.

Every year on the Saturday before Christmas the Giant Lantern Festival is held in the city of San Fernando. This festival sees dramatic light displays with elaborate lanterns lit up across 11 towns. Each competes for the prize of the best display. It is a popular attraction with locals and tourists alike visiting to see the spectacle for themselves.

India’s Christian population only makes up around 2% of the country but this equates to 25 million people! The holiday is celebrated similarly to the West, but instead of fir trees, people decorate mango and banana trees instead. In Goa expect to see Christmas carolers and to indulge in festive treats such as neuros which are small pastries filled with coconut and dried fruit and dodol a sweet like toffee made from coconut and cashew nuts. On Christmas Eve people decorate their houses with paper star lanterns to symbolize the stars the wise men followed.

Kolkata is known for its Christmas festival on Park Street. There is a sparkling Christmas light display and there are plenty of stalls selling festive foods and carolers singing holiday songs. There is a similar festival in Mumbai in the district of Connaught Place beside the Sacred Heart Cathedral.

Christmas is also celebrated amongst non-Christians in Egypt and many cities and towns decorate with sparkling lights and festive Christmas trees. Santa Claus also pays a visit to Egypt, but here he is called Baba Noel. Eager kids leave out sweet treats for him and instead of climbing down the chimney he creeps in through the window!

China has a very small Christian population, with less than 1% identifying as following the religion. Christmas is not widely celebrated in China, even though it’s where most of our trees and decorations are made! However, Christmas is becoming a popular holiday in the big cities. The meaning behind the holiday may have been lost in translation but you can still expect to see Christmas lights, Santa’s grottos and find people exchanging gifts on December 25th. A popular tradition that has caught on is giving the gift of an apple on Christmas Eve. This is because the word for Christmas Eve and apple in Mandarin are almost identical.

Other holidays celebrated in December

It’s important to remember that December is not just about Christmas. December is also when Jews celebrate Hanukah and Kwanza is celebrated. Learn more about these traditions below.

Hanukah is also known as the festival of lights. It celebrates the story of the Maccabees, a small group of Jews who fought against the Greeks who were trying to outlaw Judaism. After three years of war, the Maccabees won, they cleaned up the temple and lit a lamp to celebrate, however they only had enough oil to last one day, but instead it burnt for eight days. Therefore, Hanukah is celebrated for eight days, each honouring the light of the lamp. Families celebrate by lighting a candle on a candlestick called a Hanukiah each night of the eight days, sharing presents, playing with a dreidel and eating potato cakes called latkes.

Kwanzaa is a holiday celebrated in America that honours African culture in the African American community. The holiday began in 1966 and is enjoyed by millions across the USA today. It is observed over seven days from the 26th December to January 1st with the holiday ending with a feast and exchanging of gifts. Celebrations of the holiday involve lots of singing, dancing, drumming, feasting and storytelling about ancestors and ancient traditions.

How to Plan a Memorable Camping Adventure