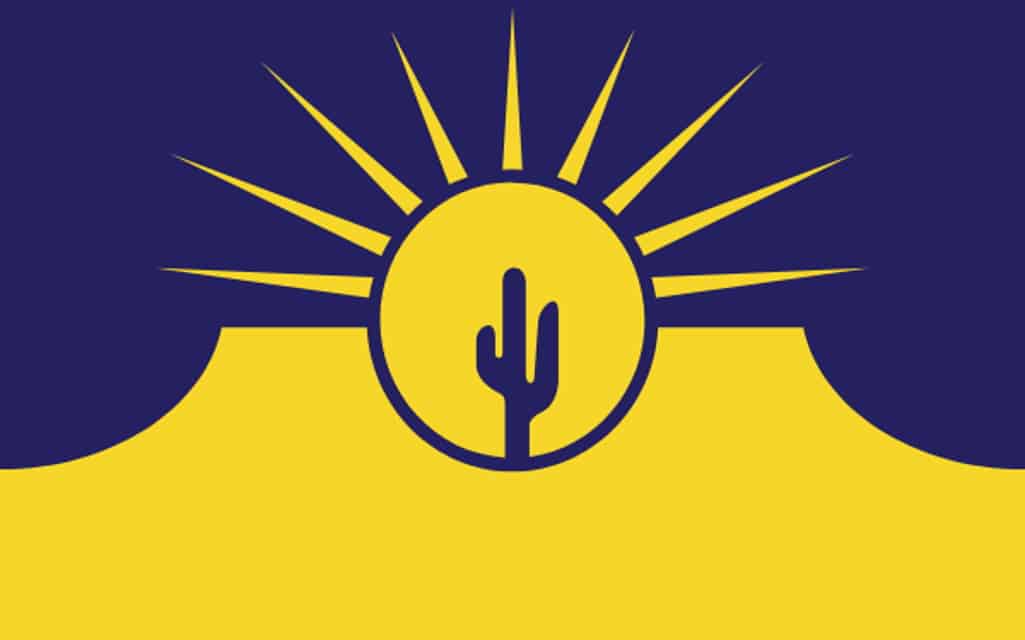 Located in the Southwestern US, Arizona is the 6th largest state and is known for its hot and dry temperatures.

Inside of Arizona is a city called Mesa. Mesa was founded by Hohokam people roughly 2,000 years ago and formally became a city in 1878.

Since then they’ve put together a flag that not only looks great but has a deeper meaning behind every detail.

Throughout the article, we’ll deep dive into the interesting facts and design of the flag as well as the history of Mesa.

With that being said, let’s jump right in!

Although this is currently the official Mesa flag, it was rated 146 out of 150 flags. That means it was rated the 5th worst city flags in the United States.

Some of the best city flags include Baltimore, Washington D.C, and Chicago.

So if it’s so bad then what does it look like?

The flag features 2 primary colors, blue and yellow. The top portion of the flag is blue while the bottom half is yellow.

In the center is a yellow mesa with yellow sun rays above.

There is also a blue saguaro cactus in the center.

The flag officially became the city’s flag in 2005.

Read More: Road Trip to Scottsdale, Arizona: What to Pack

With every little detail on the flag, there’s a deeper meaning.

They wanted to focus on 5 primary ideas when designing this flag.

The first is simplicity. They wanted to keep it simple with 2 colors and minimal design. This makes it easy to look at as well as easily recognizable.

Next they focused on symbolism. They wanted to represent Mesa and “say” Mesa to the viewer. They wanted people to see the flag and immediately recognize Mesa.

The colors don’t have much significant meaning but they want to keep the idea that light colors to border light colors and darks don’t border darks.

Another huge focus point is the attraction venues. They don’t want it trendy but to catch the eye of viewers.

The final focal point was distinctiveness. They wanted it different from any other flag so that it really stands out.

Founded in 1978, Mesa is a beautiful city located in Arizona.

Mesa is the largest suburban city by population in the entire United States and the third-largest city in Arizona after Phoenix and Tucson.

Mesa is also home to one of the most prestigious colleges in the US which is Arizona State University.

It’s primarily a hot and dry climate as it’s a civilized desert.

On the horizon are mountains as well as beautiful sunsets and sunrises almost every morning. Mesa is truly one of the most beautiful cities to live in.

Read More: Exploring The Grand Canyon State: 5 Thrilling Things to Do in Arizona

Mesa doesn’t only have a beautiful city, but they’ve also put time and meaning into the theory flag and even though it was rated the best, it still stands for the amazing city of Mesa.

All in all, Mesa’s flag represents everything Mesa fought and worked for. So for those that love the city of Mesa be sure to fly their city flag high.

7 Best 4th of July Decorations for Celebrations at Home

5 Visa Rules You Need To Know When Moving To USA

Car Accidents in Teaneck are Increasing: Here’s How We Can Reduce...