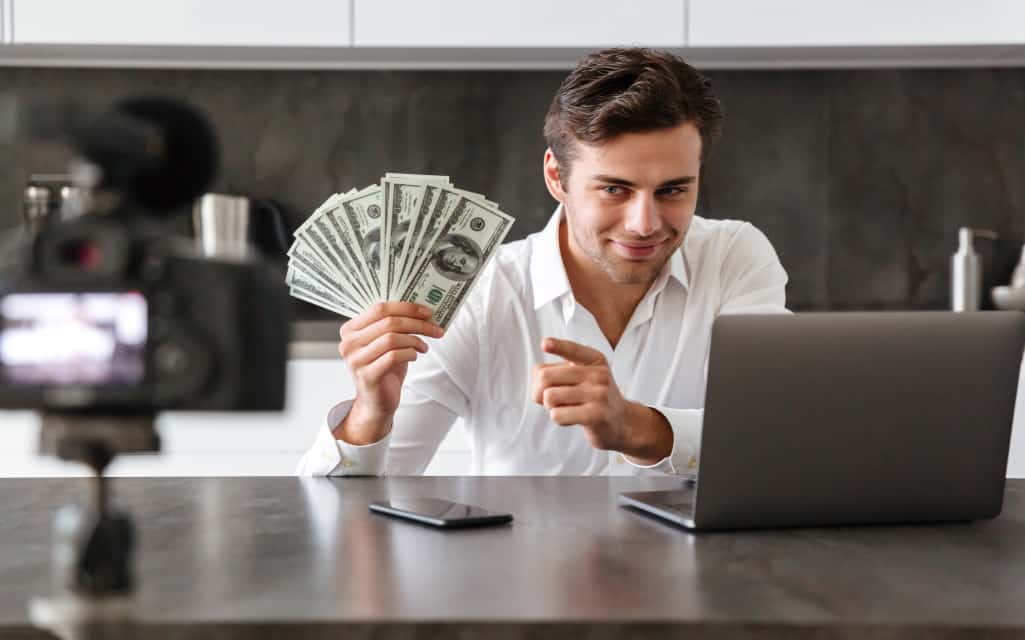 Each platform has its own rules, so payments may differ. Let’s have a look at those YouTubers who make fortune with the platform.

YouTube feature pays each influencer differently based on the country where the video is viewed. American and Western European audiences brought in the largest payouts. Unfortunately, Russian-speaking YouTubers are not so lucky. The company has generally banned the monetization of Russian audiences due to the war in Ukraine.

The company doesn’t just pay influencers, it charges a fee (which varies by country) for videos viewed. For simplicity, revenue per mile (1,000 views) is usually considered. However, YouTube gets a cut of this revenue before the influencer gets paid. The final amount is based on RPM.

According to a report by Media Shark, the average cost per 1,000 views for a YouTuber in the US is $6 to $8. Bloggers from the US, Australia, the UK, or Canada can earn between $5 and $30 per 1,000 views. Calling costs also depend on the topic and audience engagement. This is the amount excluding Google’s share. Advertisers pay YouTube a fee for every 1,000 ad views. Then YouTube takes 45% and creators take the rest.

In the best case, a million views can get you about $15,000. To get closer to it, you need to post no less than 67 videos that should get at least 1 million views together.

To become a millionaire, you need to post a video a week that gets millions of views over a year. YouTube will pay an estimated million dollars for this. Of course, this scheme doesn’t take into account taxes, content production costs, and salaries of the influencer team. Obviously, it will take some time to get to a million dollars unless the first video doesn’t get tens of millions of views from scratch.

Let’s see the list of the richest YouTubers considered to be the most successful YouTubers of 2021!

P.S. This is not a ranking by income, but the top 6 iconic YouTubers.

Daniel Robert Middleton, better known as DanTDM, is a British YouTuber and gamer known for his video game reviews. His online video channel covers many games including Minecraft, Roblox, and Pokemon, and it is one of the best YouTube channels in the UK.

DanTDM has 26 million subscribers and 18.5 billion views of his videos, and his net worth is estimated at $35 million.

She has a Beauty Blog followed by four million followers. Her videos don’t gain a lot of views, but this is the case, when social networks don’t give a big income but help with brand development. Huda is the founder and CEO of Huda Beauty.  Cosmetics being sold under her brand has brought her more than$ 560 million.

Regardless of how it sounds, Ryan Kaji spends most of his time on YouTube. He makes game reviews and entertainment stuff for children. More than 32 million people follow his channel. And he is … ten years old boy!

Rayan made $27 million last year, according to Forbes. Well, this is not a record for the child; he has a competitor, Nastya, who is 8 and earned $28 million in 2021.

Mark is an American blogger originally from Hawaii. He has an audience of over 32 million subscribers and is one of the TOP 3 richest YouTubers.

“From quality content to meme-able garbage, from scary games to full-on interactive movies, you’ll find it all. You will, actually. I have over 5,000 videos, so I’m sure there’s something you’d like”, – that’s what he says.

One of his first videos to become a megahit was his play-by-play of ” Minecraft” in 2010. Unlike conventional bloggers, PewDiePie devoted his “Let’s Play” videos to communicating more personally with his viewers. They say says that Kjellberg acts like he’s spending time with a friend.

Evan Fong, else known as VanossGaming, is a Canadian gamer with a net worth of$ 25 million. He plays games like Grand Theft Auto and Call of Duty.

And the last question to be answered today is: which of the YouTubers earned the most at the end of 2021?

Here is the top10 highest- paid YouTube stars, according to Forbes estimates

Let’s talk about the golden boy?!

Mr.Beast turned 24 this May. His main YouTube channel has 94 million subscribers, while the MrBeast Gaming channel has 27 million.

For the March cover of Rolling Stone magazine, he posed lying on a huge pile of dollars. He loves shocking, crazy pranks, and giving away cash, and, of course, being the center of attention. In 2021, his videos gained 10 billion views, twice more than previous year.

“If you ask anybody that knew Jimmy before, they’d be like, ‘Really? Jimmy got famous?’ He was always real quiet”, writes Rolling Stone magazine.

Jimmy Donaldson started as a PewDiePie-style game reviewer. It was 10 years ago.

Yeah, this is the case when a student is about to bypass his master.

So far, his channel has taken fifth place in the YouTube rating of subscribers. In fourth place is his” teacher” PewDiePie. But, of course, MrBeast wants to be on the top of all of the YouTube rankings. So, we will soon see if he manages to make it and not only be the most well-paid but also the most popular.

If you are into influencer marketing and would like to know more about Youtubers’ earnings and the data that directly affects the monetization mechanisms — we are here for you.

Top Tips for Running a Business

What Can a Personal Injury Attorney Help You with?

What Makes a Boutique So Unique?

How to Build a Career in Product Management

How To Legally Build Your Own Gun