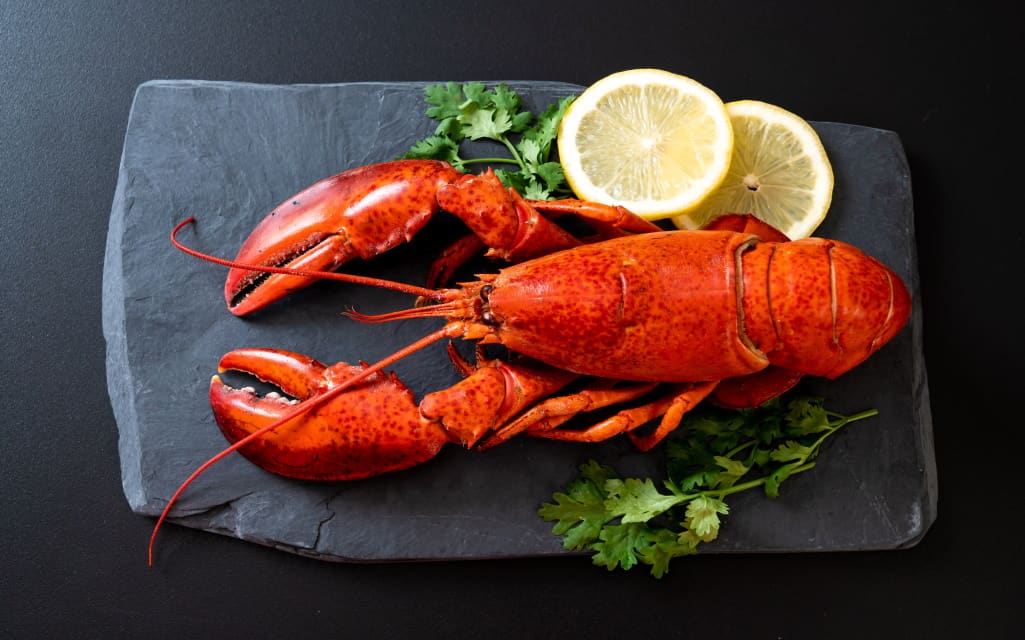 Lobster is a lot easier to prepare than most people think. It’s not cooked often so it makes very special meals – lobster is usually reserved for celebrations (unless it’s lobster rolls). The main reason why this delicious shellfish is only eaten on special occasions is that it isn’t cheap.

Lobster is very healthy and nutritious. A cup of cooked lobster that weighs approximately 145g contains:

Lobster is a rich source of copper and selenium. It also contains vitamin B12, vitamin E, zinc, magnesium, phosphorous, and a small amount of omega-3 fatty acids. All these nutrients are very important in protecting us from a wide range of diseases such as anemia, thyroid disease, and depression.

Lobster also contains cholesterol but that’s nothing to worry about as polyunsaturated fats are helpful in reducing cholesterol levels and the risk of stroke and heart disease.

Lobster is usually prepared in two main ways – either by boiling or seaming and is often eaten as a main course. It may also be enjoyed as a sandwich filler or may be added to dishes like pasta and mashed potatoes.

Preparing lobster at home is a great way to cut down on cost. It also makes mealtime so rewarding as it gives you the opportunity to play around with different ingredients. There are endless lobster recipes that make cooking lobster look so easy. Now there’s no excuse to miss out on this delicacy.

Note: The best way to defrost frozen lobster is in the refrigerator and not out at room temperature.

How did lobster get so fancy?

Lobster is somewhat exotic and costs money signifying the use of currency in pursuit of pleasure and fulfillment. Some people may even argue that lobster tastes so good because it’s so expensive.

When it comes to the pricing, the logic behind it is pretty simple – it’s basic supply and demand.  This means that the price of lobster is directly affected by how much of it lobstermen are able to catch. The supply explains why the prices keep fluctuating significantly over the years. In the past, lobsters were so abundant and were low-priced but over time lobster got very pricey very quickly.

Cultural and social influences have also had a huge role to play in how lobsters got fancy. People started to make healthier diet choices and their behavior impacted the eating habits of others.

It’s possible that a certain social class only enthusiastically enjoys a particular meal because it’s intriguing and considered a rare and exotic item. The influence could either be direct or indirect, conscious or subconscious. Generally, habits develop through interaction with others although people are not necessarily aware of the social and cultural influences exerted on their eating behavior.

Another reason why lobster is believed to have gotten more popular is that just like other meats earlier, it was cooked dead and not alive as it’s done nowadays. This is perhaps how it became so tasty.

All in all, lobster is delicious and it surely deserves all the luxury treatment it gets. Its current social status may be compared to wearing a sophisticated top hat and an opera cape while almost a century ago it’d have been seen as wearing overalls and picking up trash.

Today, lobster is a delicacy that’s usually served in posh restaurants and sells at the market price. It’s only a step or two lower than caviar.

Read More: What You Should Be Eating to Boost Your Collagen Levels

Lobster has, for the longest time, been seen as a delicacy. Its desirable reputation is due to the fact that lobster may be cooked live which makes it even more appetizing. Also, lobster provides numerous health benefits to consumers making it a pricey indulgence. If the delicious taste and nutritional importance of lobster don’t motivate you to incorporate more of it into your diet, I don’t know what else will!

Everything You Need To Know About Coffee Packaging

Things you can Cook in an Instant Pot, and Things you Can’t

4 Ways to Make the Best Out of Your Summer BBQ

Hurom Hexa Blender: Why eat it, when you can drink it?

Top 10 Superfoods You Should Eat for Weight Loss

Turmeric and Other Anti-Inflammatory Spices

How to build a happy Relationship

How Do Flight Compensation Companies Operate For You?

Best Salads To Make At Home