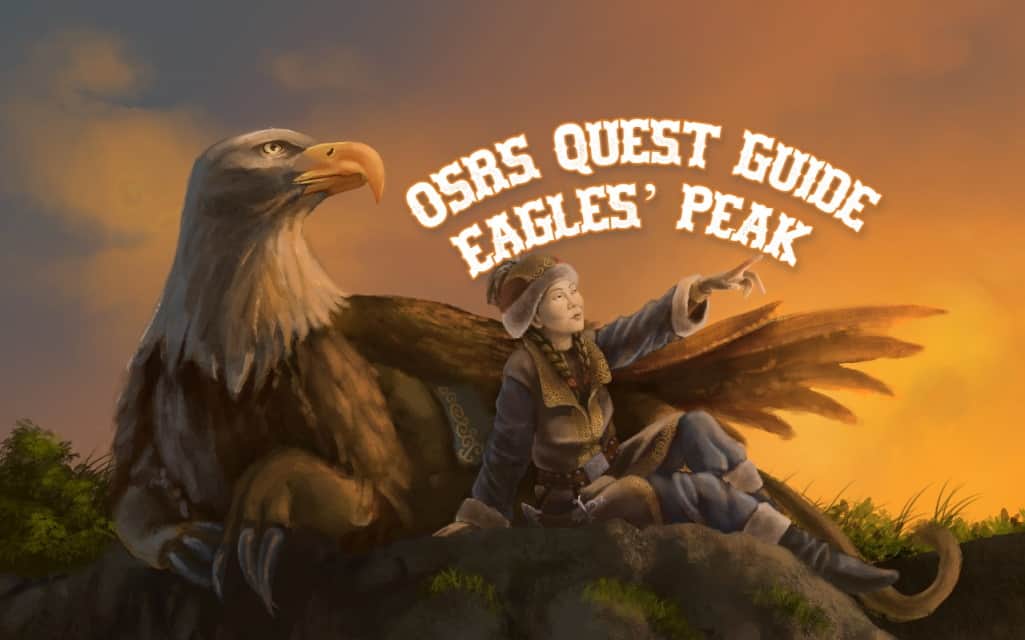 Here is a great quest for you to embark on to further your Hunting skills in OSRS.

The Eagles’ Peak quest surrounds the game’s Hunter skill, in which you need to help the Ardougne Zoo to obtain a new attraction in the form of a ferret in order to get a new way of training the Hunter skill. The requirements are minimal so you won’t need to worry about your OSRS gold or having to buy OSRS gold. You just need to be at level 27 Hunter and have yellow dye, swamp tar, and 50 OSRS GP coins.

To start off, go to the Ardougne Zoo and head to the southwest where you can speak to the zookeeper, Charlie. You will be informed that a ferret has escaped whilst being delivered and will request that you speak with Nickolaus, who is a huntsman that initially agreed to catch the ferret. However, the huntsman hasn’t been heard from in quite a while now, so ask where you should start looking. You will then be directed to the mountains near the Gnome Stronghold.

To the west of the Tree Gnome Stronghold is Eagles’ Peak. At the bottom of the mountain to the northwest, you will find a tent, but no sign of Nickolaus. On the ground, you will find a book, so inspect them to get the bird book. Attempt to read it, and you will see a metal feather fall out of the book for you to retrieve. Once you have the feather, go up the path to the peak from the south. At the top, you will find a door with a feather inscription to the north, so you can use the metal feather on it to open it.

Head inside to find a feathered journal, before noticing the three tunnels that the path splits into different areas. Take the route to the south for now with the giant feathers nearby. You will see Nickolaus across the ledge, so click to shout to him. Watch the cutscene and go through the dialogue until the end to offer help.

You will have been requested to make a disguise, so speak to him about eagles and offer to help. Get 10 eagle feathers then head to Varrock. Here you need to visit the Fancy Dress Shop to the southeast and request two bird costumes. Asyff will make two eagle costumes for you with the giant feathers, plus swamp tar, 50 OSRS gold coins, and yellow dye. Head back to the Eagles’ Peak dungeon and shout to Nickolaus once more, who will want you to bring him the costume.

With that in mind, head south-west then take the path to the east. Here you will find a stone door with an eagle on it. You will need three feathers to open the door.

Firstly, the bronze feather is to the west, so go this way and head down the tunnel. The stone pedestal holds the feather, but it is clearly a trap. Attempt to take it then use the winches in the corners to break the trap, grab the feather, and head towards the next feather.

The Silver feather is to the north through another tunnel. You will see an empty pedestal this time, and you will need 27 level Hunter to inspect it. This will see a trail appearing, so follow it until you come to the rocks. Investigate the rocks and if done right, you will see another trail appear. Repeat this process until you reach a tunnel within the wall. Click on it and you will be attacked by a kebbit, so kill or threaten it before getting the silver feather from it.

The last tunnel is to the northeast, and you will need to go to the end of the corridor to the west of the entrance. This is blocked by wings and metal eagles, which can be moved by adding bird seeds to the bird feeder nearby. Meanwhile, we will need to operate levers to move the wings.

You will get the odd birdseed from the birdseed holder near the entrance to be put into the feeders. We then need to pull the levers, so firstly head to the one to the northwest of the location. Head southeast after this lever then add seed to the feeder. Do so again in the one next to it, before pulling the lever to the southeast.

Once you have all three feathers, use them on the eagle door. Wear the disguise to get past the eagle guard, who can only do minimal damage so don’t get out your twisted bow just yet, and speak to Nickolaus, who will tell you to meet him at the camp. Head out of the dungeon then go back down the rock climb to the tent from earlier. Here you will be taught how to catch ferrets by Nickolaus. Use the techniques he taught you to get the ferret then take it back to the Ardougne Zoo. Speak with Charlie to get your rewards and your OSRS quest will be complete.

You won’t have to look for OSRS gold for sale to complete this Eagles’ Peak quest, though you will get some neat rewards in the form of two quest points, as well as 2,500 Hunter experience, plus the ability to use box traps and eagle transport access.

Have you completed this OSRS Eagles’ Peak quest? Let us know your thoughts in the comments section below!