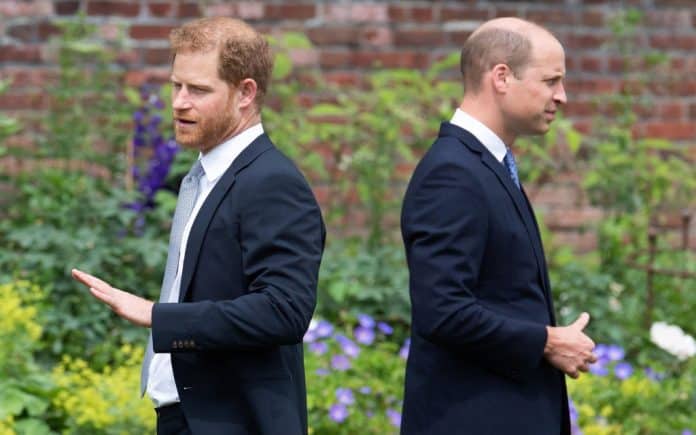 Prince Harry claims in his upcoming memoir that he was beaten and bruised after his brother, Prince William, threw him to the ground; And that was during a violent quarrel two months before he and Meghan Markle left the royal palace.

In the content of the copy of his book “Spear” obtained by “The Guardian” newspaper, Prince Harry mentions that the alleged quarrel in November 2019 between him and his brother, Prince William, was one of the most important reasons for the end of their relationship.

According to what the Duke of Sussex claimed, their quarrel began after Prince William stormed his room, and his extreme anger was controlling him.

And Prince Harry mentioned in his book, which is scheduled to be released on January 10, that his brother, the Prince of Wales, wanted to talk to him about their disastrous relationship and their conflict with the press, which he blamed on his brother’s new wife, Meghan Markle. Also according to the notes, Prince William called Meghan Markle “difficult and rude.”

After that, the two brothers continued their quarrel, as well as Prince William’s stubbornness, which led Prince Harry to accuse him of acting as heir to the throne, at a time when William claimed that he intended to help his younger brother.

The Duke of Sussex attempted to de-escalate the situation by handing his brother a cup of water, yet he refused it. Within moments, without warning, the latter grabbed him by the lapel and ripped off his necklace before throwing him onto a dog’s dish that shattered at impact. The pieces embedded into his skin as he lay there in shock until finally regaining himself and telling his assailant to leave.

After that, Prince William felt remorse and tried to fix the situation, but Prince Harry refused, so William left, before returning later to apologize.

“You don’t have to tell Meghan this,” Prince William reportedly told his brother, to which Harry replied, “You mean I shouldn’t tell her you attacked me?”

In the end, Prince Harry told his wife Megan what happened after she saw the scratches and bruises on his back, and later  the couple announced their separation from the family after only two months.

Despite exposing his brother’s abuse in his book and describing him as a bully in his Netflix documentary, Prince Harry said on Sunday that he wanted to reconcile with his brother William. “I want my brother back… I want my father back,” he stressed during his interview with ITV NEWS.

How much did Harry and Meghan receive for their series on...