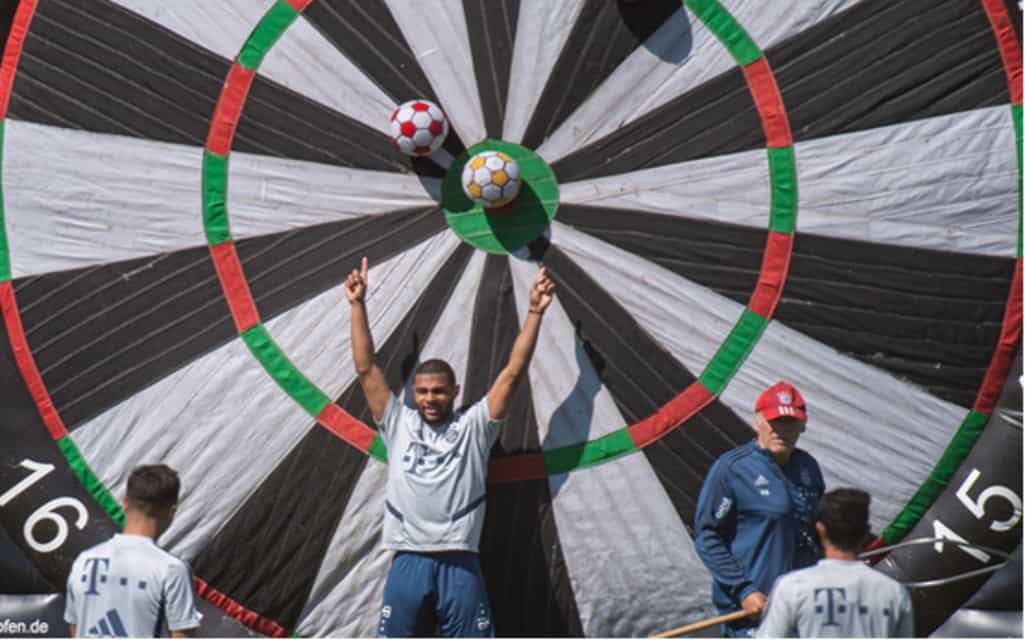 Soccer has long been considered an effective exercise to keep fit, while darts are among the most popular games full of entertainment. We can go back to 2016 when Foot Sports UK launched a neat combination of the two fun games, called soccer darts. As its name suggests, soccer darts is an ingenious darts game played with a ball on an inflatable soccer dart board, instead of darts.

As a simple but interesting outdoor game, inflatable soccer darts quickly gained massive popularity in the world. Numerous fans have posted pictures or videos of themselves playing the game on Twitter. There is also a growing number of entertainment venues are adding the event. Some believe that soccer dart is the new hit when it comes to outdoor entertainment.

During the outbreak, Bayern also used soccer darts to train their players’ shooting skills better. A number of Bayern players, including Lewandowski, Muller, and Thiago, took part in the unique training. Winger Gnabry enjoyed the game so much that he even celebrated by raising his arm after scoring the red heart on the inflatable soccer dart board.

It is reasonable that inflatable soccer dart is so well received for its undeniable benefits. One of the advantages lies in innovation based on the rules of soccer and darts. In other words, it is a wonderful combination of the health of soccer and the fun of darts. What’s more, unlike soccer, the soccer dart has no limit on the number of players. As a result, players are able to enjoy the game together without worry.

Additionally, inflatable soccer dart is suitable for various situations, whether it is a campus exercise or team building activities in enterprises. For instance, if the inflatable soccer dart is set up in the school’s sports meeting, the children will be eager to participate in such an exciting event. It is the perfect way for schools to achieve the purpose of advocating health as well as show children’s energetic and positive spirit.

Similarly, when an enterprise carries out brand promotion or employee activities, the enjoyment of the inflatable soccer dart can avoid the possible awkward silence of regular activities. In an enthusiastic, interactive atmosphere, the purpose of the event can be realized more easily.

Besides, the inflatable board enhances the practicality of soccer darts. Since the board is inflatable, it does provide convenience for pre-game preparation and post-game storage. Compared to other activities, the relatively low cost contributes to the benefit of the game as well. More importantly, there is always one question for all outdoor games worth considering whether the game is safe enough. Actually, inflatable soccer darts have been designed with the issue in mind. The sticky material on the inflatable board significantly prevents balls from bouncing off after hitting it.

Above all, we can already conclude that the soccer dart is an unstoppable trend in inflatable sports games for its innovation, applicability in various situations and practicality. If you get interested in inflatable soccer darts, products from Cheer Inflatable can be your ideal choice.

With more than 17 years of professional manufacturing experience, Cheer Inflatable is famous for its reliable quality of products. Their soccer dart board is made of PVC or oxford cloth to make the game as exciting as possible with guaranteed materials. To meet various usage scenarios, you can customize the size according to your actual needs.

Hand-blown Beauty: The Difference Between Hand-Blown and Machine-Blown Glass Products

Getting to know Thanatos from Greek Mythology

Where Should You Buy E-Liquid From?

What Makes a Smoke Box Perfect for Gifting Purposes?

Looking for the perfect gravestone? Here’s what to consider

If you are looking for treasures at a flea market, you will find them.

Path of Exile – What are Chaos and Exalted Orbs?

Tips on Packing Paintings for Moving