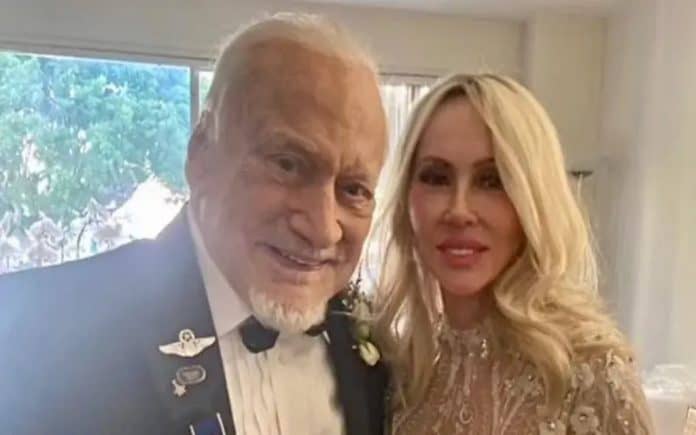 The 93-year-old former US astronaut, Edwin Buzz Aldrin, revealed on Saturday, January 21, 2023, that he was finally able to marry the “love of his life.” He said that he married the one he loved on his birthday.

“Buzz”, who is the second person in history to set foot on the moon in 1969, after his late colleague Neil Armstrong, said in a tweet on “Twitter” that he had married the one he loved throughout his life on his birthday.

Aldrin wrote on his Twitter account, which is followed by more than 540,000 people, saying: “On my 93rd birthday … I am pleased to announce that Dr. Anka Faure, whom I have loved for a long time, have decided to get married.” The tweet included pictures of the newlyweds, and US media reported that the bride was 63 years old.

He added, “We have decided on a sacred marriage in a small private ceremony in Los Angeles and we are excited as teenagers.”

It is worth noting that Aldrin gained worldwide fame and a place in history, by setting foot on the moon 20 minutes after fellow astronaut Neil Armstrong took his epic first step on July 20, 1969, as part of the NASA Apollo 11 mission. ).

As the bride, she holds a PhD in Chemical Engineering. This is the fourth marriage of the former astronaut. In July 1969, Apollo 11 mission commander Armstrong, lunar module pilot Buzz Aldrin, and command module pilot Michael Collins set out on a nearly 250,000-mile journey to the moon. It took them four days to reach their destination.

On my 93rd birthday & the day I will also be honored by Living Legends of Aviation I am pleased to announce that my longtime love Dr. Anca Faur & I have tied the knot.We were joined in holy matrimony in a small private ceremony in Los Angeles & are as excited as eloping teenagers pic.twitter.com/VwMP4W30Tn

Two hours on the moon

While Armstrong spent two hours and 32 minutes on the lunar surface, Aldrin, who followed him, spent about 15 minutes less. The two astronauts planted an American flag, collected moon rocks, and conducted science experiments before returning to the spacecraft. They also spoke to President Richard Nixon on the radio from the Oval Office.

Sotheby’s auction house said that the astronaut Buzz Aldrin’s jacket, which he wore on the historic Apollo 11 mission to the moon in 1969, was sold for about $ 2.8 million in New York, according to ” Euronews ” agency published in a report in July 2023. The jacket is from The logos of NASA and the Apollo 11 mission lie ahead under the sign bearing Aldrin’s name.

The flag of the United States is also featured on the left shoulder of the jacket, which is made of a fire-retardant fabric that was introduced into the manufacture of NASA space jackets, after the deaths of three Apollo 1 astronauts as a result of a fire on board their spacecraft during a ground test in 1967.

After the jacket, the Apollo 11 mission plan outline came as the second most expensive item sold at auction on Tuesday, selling for $819,000, beating expectations that ranged between $100,000 and $150,000.

Neil Armstrong and Aldrin were the first humans to walk on the moon. Aldrin, 93, is the only surviving member of the mission’s three-man crew.