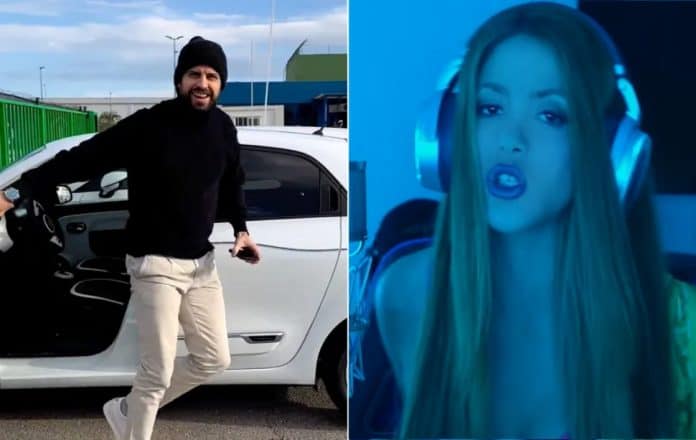 The ongoing feud between global superstar Shakira and her former partner Gerard Pique has shown no signs of slowing down, after Pique responded to Shakira’s accusations against him through the lyrics of a mysterious yet popular song aptly dubbed by media as “the song of revenge”. The track proved immensely successful, garnering an astonishing 134 million views on YouTube.

Pique, 35, responded to Shakira’s song by appearing in a Renault Twingo car with a pleased expression. By replacing the Ferrari mentioned in her lyrics with an economical vehicle like the Twingo, he showed that he was delighted to humorously respond to what Shakira said about being supplanted for another woman who is not as good as herself: “I traded in a Ferrari, a Twingo … I traded Rolex for Casio.”

Just a few days ago, Pique joined the broadcast of “Kings League” – an organization he owns- wearing his Casio watch and made a sarcastic remark about how it lasts for eternity.

Pique excitedly announced that a partnership had been formed between the championship and Casio, with Casio generously providing brand new watches.

Although Casio was mum on what Pique had declared, Renault in Spain seized the opportunity to draw attention to its electric vehicle Twingo. In a tweet posted bearing the car’s image, Renault said: “To young men and women like you…raise your voice!”

It is highly remarkable that the Twingo car has been adorned with number 22, symbolizing the age of Pique’s fresh girlfriend. This is yet another nod to Shakira’s tune in which she sang “I deserve two 22-year-olds.”

Shakira persisted in teasing Pique, even placing a large doll of an old witch on the balcony of her house that faced his mother’s. Unsurprisingly, she was not exempt from Shakira’s mockery as hinted in her song lyrics: “She left me a victim of your mother, my neighbor, and the media at the door.”

Shakira’s new hit single has already brought in a staggering $2.8 million dollars from YouTube, Amazon, Spotify and Apple streaming services – and the numbers are only continuing to grow! According to Marca website reports, her song pulled in an impressive $512K from YouTube alone, as well as half a million from Amazon, over three hundred thousand on Spotify and an eye-watering 1.2 million through Apple; with time this income is sure to keep growing!

Last year, after a decade together, the Colombian singer Shakira and prominent soccer player Pique – who has represented Barcelona, Manchester United and the Spanish national team – parted ways. They are proud parents to two children.