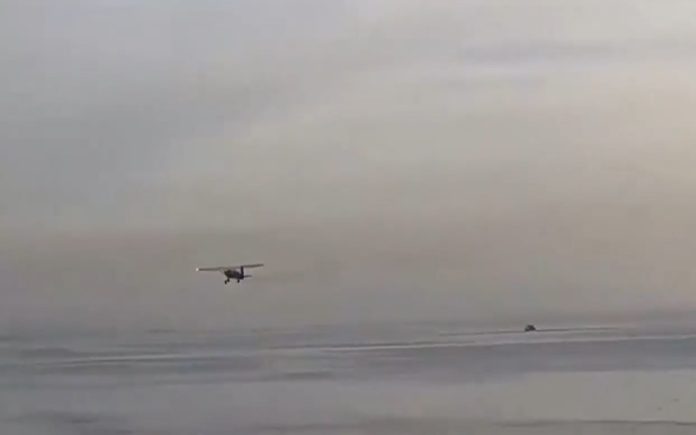 Social networking sites in America shared a video clip of a “Cessna 150” plane crashing while trying to make an emergency landing meters away from Santa Monica Beach in California.

According to the American CBS network , the US aviation authorities opened, on Friday, December 23, 2022, an investigation into a small plane crash that killed a man and injured the pilot.

The network quoted the Los Angeles County Fire Department as saying that former Santa Monica Mayor Rex Minter was on board the plane, and that he died during the accident due to an emergency heart attack, while the pilot was taken to hospital.

BREAKING- New video of a small plane crashing into the shore next to Santa Monica Pier. 2 people onboard reportedly suffered injuries but are alive
.
.
.
Contact newsdesk@trafficnewsla.com for licensing pic.twitter.com/rQjoOQfkDo

Minter was elected to the Santa Monica City Council in 1955, served as mayor from 1963 to 1967, and later served as Arcadia’s attorney and as a judge in Los Angeles County Superior Court, according to a statement posted on the city’s website.

For his part, US Federal Aviation Administration spokesman Ian Gregor said that an investigation is underway into the crash, adding that the pilot reported engine problems after taking off from Santa Monica Airport.

An investigation underway after this stunning accident near the #SantaMonica pier. A single-engine plane crashing into the beach while trying to make an emergency landing. The pilot and a passenger were hospitalized. 11pm ABC7 pic.twitter.com/VVHudhe9cb

According to the flight recording broadcast by the media, the pilot’s plans were to fly to Malibu, but he started to have an engine problem.