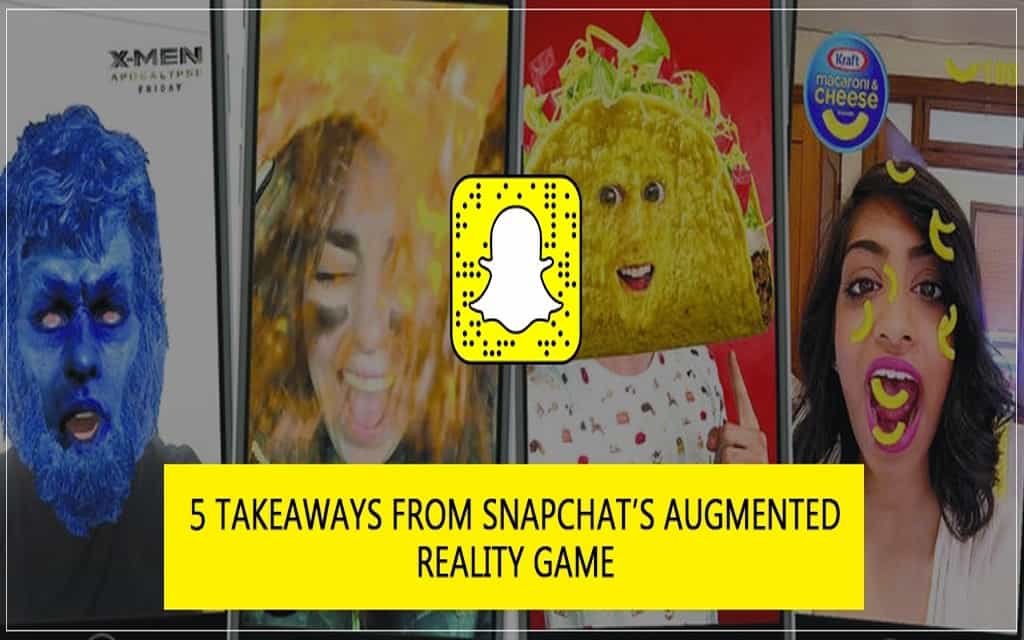 One of the most interesting ways to experiment with the physical plane (that you and I live on) is to technologically enhance it with the virtual world. ‘Augmented Reality’ works in pretty much the same way. It superimposes computer-generated information (visual, auditory, haptic or other sensory modalities) on the actual user environment to transform the way we talk, walk, work, play and socialize. For instance, Pokémon Go is an AR-based game for smartphones, which directs the players to different parts of their localities in search of the DIGITALLY PROJECTED Pokémon that you can only see through the AR-activated lens in your camera.

Even though the concept of ‘Augmented Reality’ is still in its infancy, multiple media giants have made use of it in their own unique way. Especially famous in this regard is the messaging app, Snapchat, which has turned the tables on traditional AR by delivering its users a whole new kind of aesthetic experience. Speaking of which, what are the top takeaways from Evan Spiegel’s AR strategy? Check out Snapchat’s AR strong points below:

Snapchat has definitely improved its facial filter game and made people go gaga over its creative AR masks. Once you open the app’s camera and scan your face with the advanced ‘Augmented Reality’ mapping, you’ll get the option to choose and place multiple lenses on your features to spice up your social media personas. The best thing about these face filters is that they are digitally augmented and painted by the app on your countenances to such a perfection that you can’t tell whether they’re really there or not. Currently, Snapchat’s tech team is working on developing face-transforming AR glasses by which you’ll be able to see wacky filters on everyone’s faces in REAL TIME provided you’re hooked to a reliable network, which you can surely get from the top internet provider in your area, FYI.

Snapchat has recently released its Landmarkers project, which animates iconic landscapes from around the world through the special AR lens on your phone. The Eiffel Tower is shown to ooze rainbow beams, the Flatiron Building is transformed into a huge slice of pizza, the Capitol blasts confetti into the air, and the Chinese Theatre takes the shape of ice cream scoops and hot dogs. Interestingly, these lenses are designed by Snapchat users themselves via Lens Studio 2.0, giving them more liberty and chances for participation in the AR ecosystem development. Thus, ‘Augmented Reality’ x Landmarkers truly lets your imagination run wild and helps you reinvent traditional architectural forms with a twist of your own.

Brands, influencers and the overall media market can take a hint from Snapchat’s remarkable usage of AR in advertising. For instance, to promote its new Snap Original show, Bringing up Bhabie, Snap Inc. has put up a static billboard on Sunset Boulevard with a QR code in plain sight. Upon scanning, the app brings Bhabie to life in full augmented reality on the users’ phones, and she starts talking through the billboard in real-time. This shows how far the AR x SnapAd immersion can go, and how it can bring about a new level of interaction with brands that no one’s ever seen before.

Snapchat in its essence is a messaging platform that enables people from all over the world to connect and communicate with one another without the slightest hitch through multimedia and texting. In addition to that, it allows them to come up with personalized avatars that depict their physiognomies in the best way possible. Now, Snapchat is offering Bitmoji avatars in 3D with an ‘Augmented Reality’ angle. Meaning, once you tap your screen in the app, your Bitmoji avatar will pop up in the real-world environment doing yoga, taking coffee or even playing guitar. With this augmented Bitmoji, you can do different things, and even invite your friends’ Bitmojis over for a tea, paving for a new level of social interaction.

Snapchat brings you a new variation of gaming that finds its roots in the AR technology and 3D gaming engine called PlayCanvas. These ‘Snappables’ are solo adventure games, limited in scope, which can be played with a specific movement of facial features, the tone of your voice or hand gestures. The users can even invite their friends over by posting a snap, and have a marathon. New Snappables are released each week and those with a special hype are carried on for long so everyone can enjoy the quick + fun experience once they open their Snapchat app.

Although Snapchat is still in the process of unleashing a full-fledged ‘Augmented Reality’ eco-system, the reverberations of its game-changing progress can be felt even now.