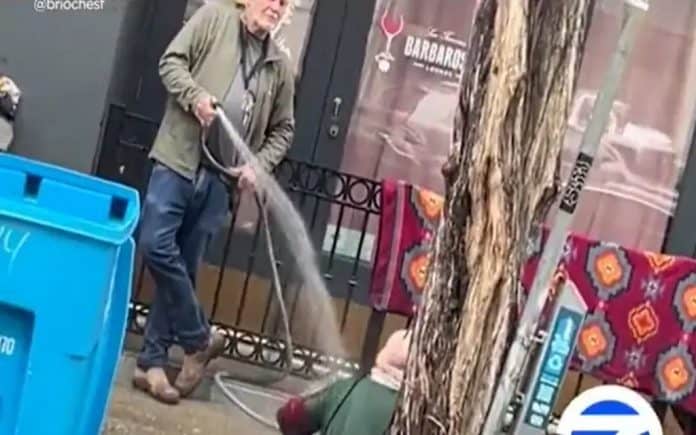 Despite the massive public outcry on social media regarding his inexcusable behavior, the owner of an art gallery in San Francisco who drenched a homeless woman with water during freezing temperatures refuses to apologize.

Collier Gwen, owner of the Art Gallery in San Francisco, defended his action in his interview with the American channel ABC7 after the painful clip spread, and refused to apologize for the incident.

This man should be arrested. This is what white supremacist do abuse, homeless, Black people, anti-blackness in San Francisco. Nancy Pelosi Districk. You got a black woman who is the mayor. pic.twitter.com/pGgLDGPuOc

He said that there had been repeated attempts to help the woman during the past two weeks, and that other shop owners in the neighborhood had complained about her presence blocking the sidewalk and entrances. He added that police reports did not seem to help.

In desperation, he sprayed her possessions when she refused to cooperate and rejected his offer for assistance in gathering them from the street.

For his part, Edson Garcia, the videographer of the clip with a mobile phone, said that while he was on his way to deliver the food delivery order shortly after 6 am on Monday, he came across the incident.

He continued, “When I glanced to my side, there was a man sprinkling water on an incredibly destitute woman.”