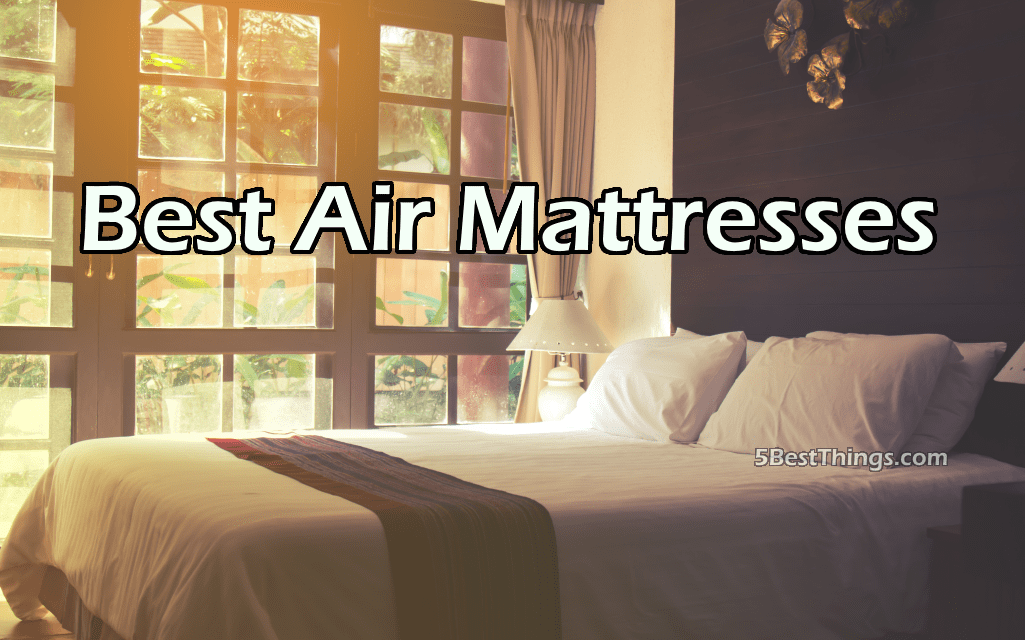 Today, we have something special on the “menu”. Over the past few months, we have taken the time to dig around the market, read reviews and tests and do some testing of our own with a simple goal – to find the best air mattress available out there.

How we reviewed the airbeds

We had no idea how cluttered and messy the blow-up mattress market was until we dove head first. Our plan was to base the list of top-rated air beds on the user reviews that we find, compare that to the prices and come up with ratings of our own.

It turned out to be a bit more complicated than that

Within the first hour of going through the reviews, we noticed a pattern that presented a problem.

Some of the top-rated airbeds had few reviews and they were not all from verified users. Knowing how the e-commerce landscape works. It was safe to assume that not all of the air bed reviews are genuine. It’s not uncommon for companies (especially the new ones) to leave reviews for their own products.

So, if we only based our ratings on how an airbed is rated in the reviews, we felt that the list we’d end up with would not be accurate.

What you see is not always what you get.

How we solved the problem

It took more than we expected (about 2 months longer) but we had to take our time to be objective. We contacted some of the users directly, we registered for a dozen of camping forums and asked the users. Most importantly, we consulted a few experts on their opinions about which of the models and brands we looked into is the best. You can see some of the top lab-tested picks among inflatable mattresses here.

Classification of the airbeds

One more extra mile we had to walk is classifying out top choices into categories:

With all that said, let’s get to the results and see which of the inflatable mattresses we looked at qualified to be on the TOP 5 list.

It’s not often that we do this, but there was just no way around splitting the space at the winner’s podium among two products. They both come from the same company (Sound Asleep).

Why are the two airbeds superior?

The more reviews we read and the more we researched it was becoming more obvious that we have a tie at the very top of the list.

What catches the eye first is that the two models from SoundAsleep look very similar and have similar specifications. However, they are in a different price range.

Looking past the looks and the listed specs it becomes what separates the two – it’s the pump.

This is the best inflatable mattress in its price range (under $150). It comes with a regular electric built-in pump. The pump is quieter, at least according to the listing, but let’s be blunt – a person looking for a good airbed will not care much for the few minutes it takes to inflate it.

They will be more concerned with the comfort and the durability.

And this one takes the cake in both those categories – based on what we’ve seen, there’s no bed that’s more popular with the users and no product that has that many positive, 4 & 5-star reviews).

If you judge a book by its covers, you might think that this is pretty much the same product as the Dream Series.

That’s not really the case.

As we mentioned, the main difference is the pump. Not to say that there’s anything wrong with the pump of the Dream Series, but the Cloud 9 features a cutting-edge “smart” pump.

What’s smart about it is that it features sensors that regulate the firmness so that the bed stays at the firmness level you choose when setting it up.

Both airbeds are superior when it comes to comfort

What makes these two more comfortable is how well they deal with the weight of the sleeper. They feature an industry-leading 40+ air coils that distribute the weight better than the competing models in their price ranges.

This not only affects the comfort but the lifespan, too, since poor weight distribution is the one of the main cause of air leaks.

How come they leveled-off in the ratings?

It’s simple, really – the Dream Series is the more basic model and the price reflects that. The addition of the smart pump for the Cloud 9 also meant a higher price tag.

So, those two leveled up and the ratings for the two best airbeds meet at the high 4.6 out of 5 stars.

The two best blow-up mattresses are also the top-rated in the following categories:

The runner is a Fox airbed from the Durabeam Series. It’s the most durable air bed out there and has the highest weight capacity. It can take up to 750 lbs, which is higher than the capacity of competing models.

What makes it more durable than the other airbeds we reviewed is better and thicker material.

As the company lists (and users we talked to on forums confirm in their review of the inflatable mattress) the PVC is thicker and more resistant to punctures.

To compensate for the sturdiness of the material, Fox airbeds added a top layer of what they call air-flow chambers. These chambers act as a topper of sorts, making the Fox Durabeam more comfortable to sleep on.

Sitting at 25 inches high, the sleeping surface of this Fox is the highest of all the models out there, which might be a factor for the elderly, because the lower models can be a bit of hassle to get up from.

Top rated in the following categories:

The category of the best air bed for guests was close. The top picks were this Serta, The Serta EZ and the previously mentioned Cloud Nine.

It wasn’t a landslide win by what gave the Serta NeverFlat the edge is the fact that it comes with a topper included.

All of the three models feature a smart pump (only Serta calls it a NeverFlat pump), which is a big deal if you are looking for a guest airbed.

The top 2 picks among camping air beds were two models coming from Coleman – the SupportRest and the 4-in-1 Quickbed.

The 4-in-1 Quickbed EasyStay is the more versatile choice because, as the name says, it’s designed to be used as either a raised Twin size, two separarate low-rise Twin, one low-raise King or one unit. It all depends on how attach/detach the parts using the belts provided.

However, the SupportRest won the title of the superior air bed for camping because of the better rating in durability and air retention.

The difference in ratings between the two was only a fraction of a point, with the 4-in-1 EasyStay rated at 3.9 and the SupporRest rated at 4 out of 5 stars. Still, both of these are solid choices for camping.

Out of the 6 products, this is the third one coming from the same company. They must be doing something right, especially if you have in mind that it’s fair to say that they are new to the market (compared to the companies like Coleman, Aerobed and Intex).

What gave the SoundAsleep Camping Series the edge over the other picks (the runner up was the Lightspeed 2-Person TPU) among high-quality low camping air beds is the fact that comfort is unparalleled. The same technology used for the top 2 models is also used for the Camping Series, and that’s what’s new.

Camping airbeds tend to be less comfortable than those intended for home use, which is not the case with this blue baby. The I-Beam Coils seem to make it just as comfortable and stable as similar home models.

The second critical quality aspect of a camping airbed that seems better in this model is the pump – to be more precise, how well it works with a car outlet.

Finally, it had the highest scores in terms of how well it holds air or, to say it differently, how little leaks it develops over time.

This list would not be complete if we didn’t take a moment to point out a little something for every depth of the wallet and need – like top budget pick and top pick among air mattresses with a headboard. In the last few years, more and more people are also turning towards weighted blankets. These blankets help in relieving anxiety, stress disorders and help in calming the mind. All these factors are essential for getting sound sleep. Yaasa Blankets is one of the most credible manufacturers of weighted blankets. Their blankets are scientifically tested and medically proven to help sleep.

The Intex Comfort Plush Durabeam is that one pick that you can be your safest bet if you’re looking for a cheaper air bed. It costs about 50% less than most models mentioned, and in some cases, it’s 70% less.

The fact that we called it cheap doesn’t mean that it’s a disposable piece of plastic. This Intex is a valid choice and can compete with the more expensive models in ways that no other Intex models from the past could.

Among air mattresses with a headboard, the two models that we feel are deserving of a mention are Intex Ultra Plush and Aerobed Opti-comfort Queen air mattress with headboard.

Ultimately, the spoils go to the Intex because we’ve seen similar quality stats and Intex is the cheaper option.

How to Choose The Best Water Filter For Your Home