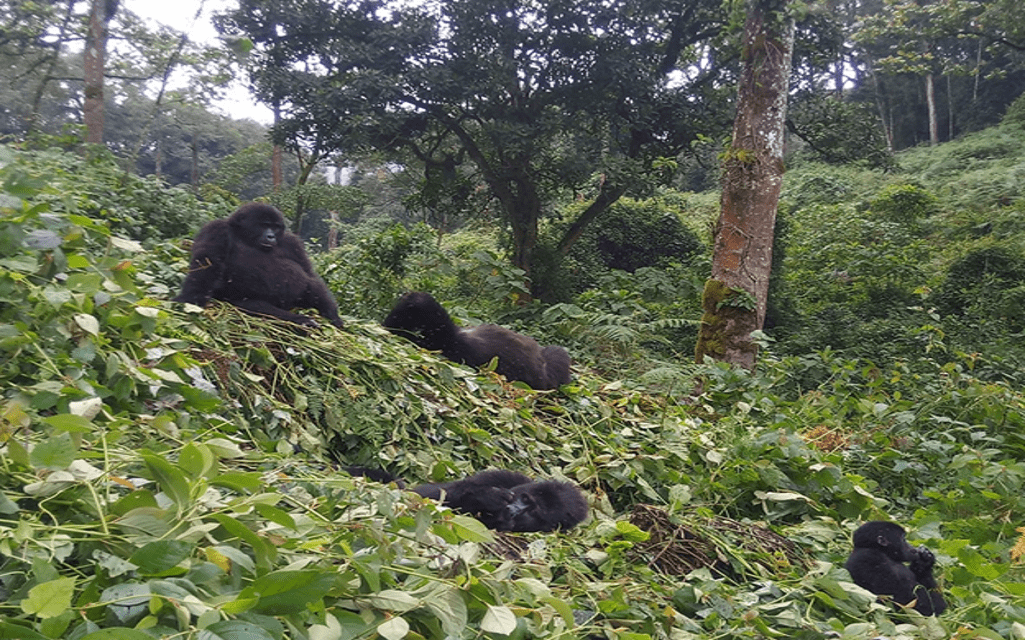 Are you planning to take a safari to Africa but wondering about where to go for mountain gorilla trekking? Mountain gorilla trekking in Africa has become one of the best and leading wildlife experiences that most visitors have always sought for in the world. Millions of visitors come from across the world to East Africa mainly to view these dramatic wild creatures in Uganda, Rwanda and the Democratic Republic of Congo. In the whole world, there are only four stunning protected areas where visitors can travel to and achieve their dreams and they include mainly Bwindi Impenetrable Forest National Park and Mgahinga National Park in southwestern Uganda, Volcanoes National Park in Northwestern Rwanda and the Virunga National Park in Eastern DR Congo. For visitors who intend to track these rare primates in Africa can either track one destination or simply combine all of them with other safaris which will make a visitor experience exceptionally memorable in life.

Situated in southwestern side of Uganda, Bwindi Impenetrable National Park is remarkably credited for its over 400 individuals of rare mountain gorillas which represent about half of all those that live on earth today. This park features about 12 families 11 of which have been set for tourism purposes and they are all widely distributed in the 4 trailheads where the treks always start from. Buhoma region features mainly Mubare, Habinyanja and Rushegura family. Ruhija region comes with Oruzogo, Bitukura and Kyaguriro and in the southern region of Bwindi National Park, there is Rushaga region which comes with Bweza, Kahungye, Mishaya, Nshongi and Busingye and finally in Nkuringo region, visitors can only track Nkuringo gorilla family. There are 11 habituated families translate into 88 gorilla trekking permits that are available each day for any visitors who is willing to travel to strike their imaginations with these rare apes while they are in their natural habitat. Permits for this lifetime experience cost $600 per visitor and you are encouraged to book one in advance. Bwindi Impenetrable Forest National Park is accessible from 9 to 10 hours on road but visitor journey comes with remarkable views of the surrounding areas and landscapes in the countryside. Bwindi Impenetrable Forest National Park can be visited at any time of year. However, for visitors who are planning their safaris, the park is best visited during the dry season which starts from June to September and from December to February. Note that you can also track these rare primates during the wet season which starts from March to May and October to November. The challenge with trekking gorillas during this season is that the ground can be muddy making the steep slopes slippery for visitors to hike through.

Volcanoes National Park is situated in northwestern Rwanda and it forms part of the Virunga Conservation Area. The park features 10 habituated groups that include the Susa ‘A’, Susa ‘B’ (Karisimbi), Amahoro, Agashya-Group 13, Hirwa, Ugenda, Bwenge, Umubano, Sabyinyo and Kwitonda group. This translates into 80 trekking permits that are always available for visitors to purchase. Permits in Rwanda are issued at $1500. Volcanoes National Park is accessible with 2 to 3 hours drive from Kigali.

Situated in southwestern Uganda, Mgahinga National Park is second protected area where mountain gorillas can be tracked in the Pearl of Africa. It refuges about 80 individuals of Great apes and it features only one habituated family-Nyakagezi troop which is tracked by visitors on safari to this park. It has about 10 individuals with 3 silverbacks. Mgahinga National Park is accessible within 9 to 10 hours drive via the most stunning countryside of Uganda.

Virunga National Park is situated in eastern Democratic Republic of Congo (DRC) and it inhabits about 200 individuals of mountain gorillas. The park also features about 8 habituated families some of which include Rugendo, Mapuwa, Lulengo, Munyaga, Kabirizi and Humba and many more. Permits in the Democratic Republic of Congo are sold at $400 which makes it one of the most affordable gorilla destinations in the world. The park can be reached via Rwanda and Uganda. Like any mountain gorilla destination, visitors are required to put on surgical masks and only visitors above 15 years are allowed to track these critically endangered apes while in their natural habitat.

A permut for Eastern Lowland Gorillas costs USd400 per person and there are a few tour operators organizing safaris to this park.

All in all, Uganda, Rwanda and the Democratic Republic of Congo are the only 3 most stunning destinations in the entire world where mountain gorillas can be tracked while in their natural habitat.

London Chauffeur Service – Know the Benefits and Tips for Choosing...