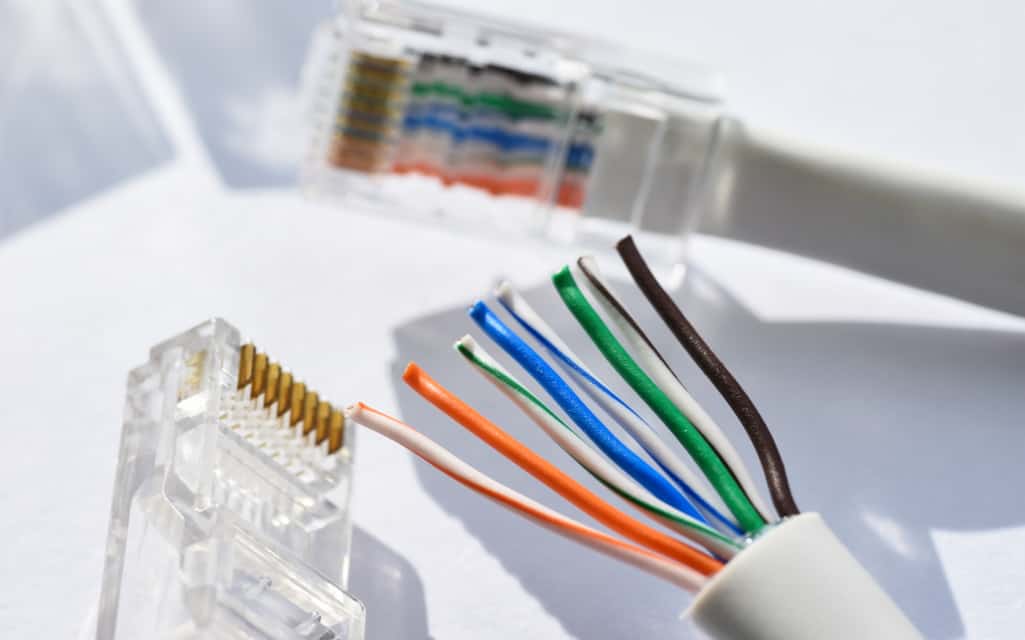 Lan cables are improving day by day to support higher data rates and reduce noise. It is sometimes difficult to choose the ideal one among a great variety of network cables. In this guide, we will walk you through the differences between CAT5e and Cat6 UTP Cable. Then you will be able to make an informed decision.

What is a CAT5e cable?

The CAT5e, also known as “Category 5e cable” is an approved lan cable since 1999. CAT5e brings significant improvements over the previous version. They are typically 0.20 mm²twisted-pair cables used on Gigabit networks on sections up to 100m.

What is a Cat6 UTP cable?

Cat6 UTP cable is a twisted pair lan cable for Ethernet links that is backward compatible with CAT5 / 5e and CAT3 category cables. Like CAT5e cable, Cat6 UTP cable allows the installation of Gigabit Ethernet sections up to 100 m. It can also be used on 10 Gigabit networks over a limited distance. At the beginning of the century, CAT5e cable essentially connected the workstations while the Cat6 UTP cable was used for the main connection of the routers to the switches.

The bandwidth of CAT5e and Cat6 UTP cables

CAT5e and Cat6 UTP cables support speeds up to 1000 MB/s or 1 GB/s. This is more than enough for the speed of most Internet connections. It is highly unlikely that you will have an Internet connection that will allow you to reach 500 MB/s.

The main differences between CAT5e and Cat6 UTP Cable lie in the data rate. For example, ENPU Cat6 UTP Cable transmission supply 250Mhz signal band transmission, which is 2.5 times more than Cat5e and its ACR value is 300% more than Cat5e. In other words, it supports a larger amount of data simultaneously. Besides, its cross separated frame design improve the NEXT and impedance characteristics, which also increases the bandwidth and SNR surplus capacity.

Since Cat6 UTP cables can reach up to 250 MHz, more than twice as much as  the CAT5e (100MHz) cables, they can achieve speeds specific to 10GBASE-T or Gigabit Ethernet. The CAT5e cable, on the other hand, allows 1GBASE-T or 1 Gigabit Ethernet traffic.

Cat6 UTP  cable shows better performance in terms of interference and noise. It reduces interference and NEXT crosstalk compared to CAT5e. The results in terms of CTE (ELFEXT), balance loss (RL), and insertion loss (IL) are also higher. This limits noise, errors and increases the flow.

Both CAT5e and Cat6 UTP cables allow for sections up to 100m. If you have to cover distances of more than 100m, the signal can be amplified using repeaters or switches.

For the 10GBASE-T link, the maximum length of a Cat6 UTP cable is reduced to 55 m. Beyond this, the flow rate drops to 1GBASE-T. To be able to enjoy 10GBASE-T over the 100m, it is recommended to use a Cat6A cable.

There are some factors to consider when we choose the right cable. How fast do you need to reach your network: 100 MB/s, 1000 MB/s or 10 GB/s? How many users? In the presence of a large number of users, the frequency of the cable (MHz) is important as well. Is the cable suitable for indoor or outdoor applications? Are there any possible sources of interference? You name it. In the end, the choice comes down to your use.

We often think that it is not worth investing Cat6 UTP Cable for better results, since your network does not require a speed of 10 GB/s. However, the material has been replaced over time, and it is much easier to change equipment than to place new cables. Since the price difference between CAT5e and Cat6 UTP Cable is not that huge, to opt for a higher quality cable is generally preferable to prepare the network and performance for the near future.

The most important element, without a doubt, whether you opt for CAT5e cable or Cat6 UTP one, is to choose for the one of good quality. Poor quality cables can cause 70% of network downtime, even if it is only 5% of the initial investment. Avoid general blackout by trying to limit costs on cables whose performance is not guaranteed. Thus it is essential to pick the reliable product.

Robotic Automation Processing And Its Impact On Business Processes

What are Components Vehicle Audio Speakers

How Has Technology Changed Our Way of Living?