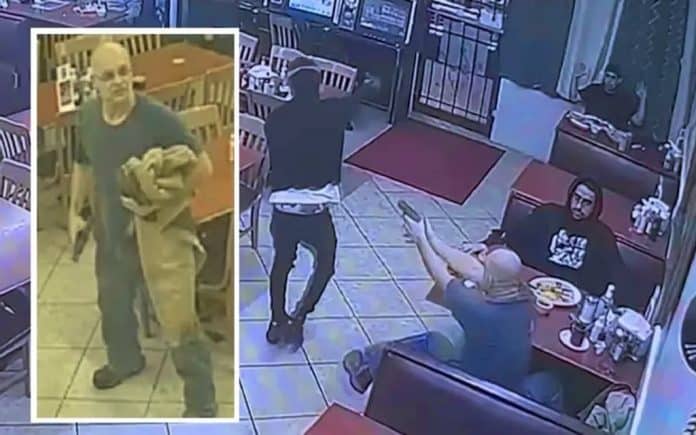 Just two days ago, Texas law enforcement was on the hunt for a man that had been seen in surveillance footage from a Houston restaurant. In the video, he is observed to be dining with a companion when all of sudden he pulls out his gun and demands money from customers at their tables. As they complied and put what cash they have on the tables, an unidentified individual appears behind him and shoots him dead mid-robbery before returning stolen items back to those present and walking away nonchalantly as if nothing happened.

All the local police department wants is to speak with the suspect, who has yet to be charged, regarding his involvement in shooting an unarmed thief. The man was spotted wearing a black ski mask only fifteen minutes before midnight on Friday and had already robbed ten customers inside of a restaurant at that time, according to what New York Post reported about their ongoing search for remaining suspects.

The police reported to the newspaper that this customer, in a fit of rage, fired four shots at the thief before he fell to the ground. Afterward, out of mercilessness and anger, even more bullets were sent into multiple parts of his body followed by one shot directly aimed for his head. Then abruptly tossing aside the gun onto an adjacent wall, this individual walked outside where their car was parked nearby.

In response to the incident at The Ranchito in Houston, Texas, where an armed robbery took place and a thief was killed by the restaurant owner, Fox News reached out to Thomas Nixon – a former police officer turned lawyer. On the matter at hand, he declared that self-defense is entirely lawful under Texan law if one feels serious injury or death may occur due to potential harm from others; this was especially true for The Ranchito’s manager since their assailant’s gun ultimately proved fake.