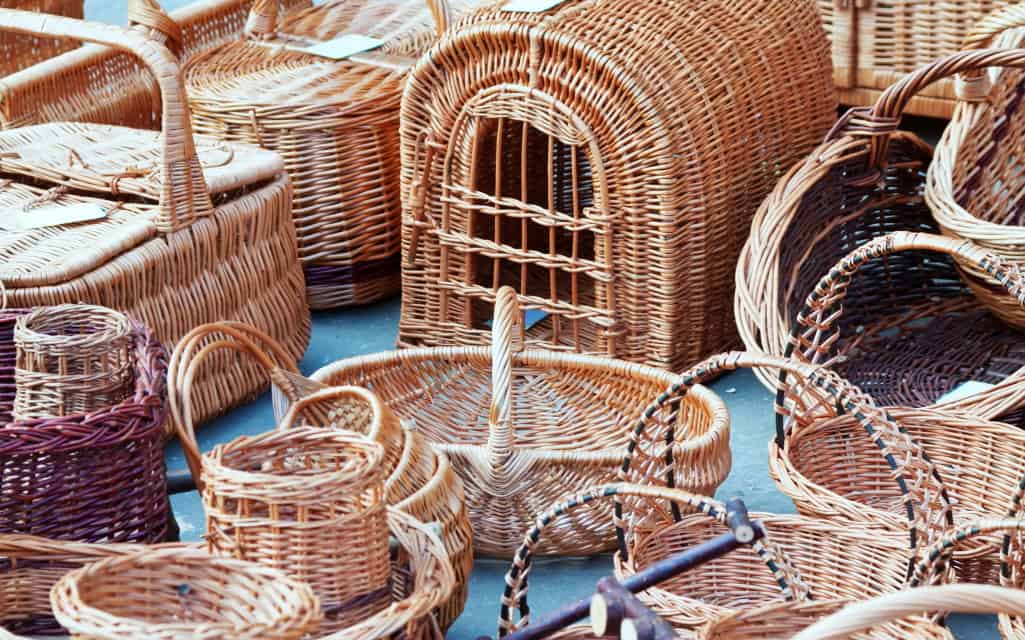 Wicker baskets are becoming increasingly popular for many good reasons. You see, these baskets are lightweight and durable to make the task of carrying things easier. You can also use wicker baskets for decorating your home or as kitchen baskets.

But before you decide to buy a wicker basket, you need to know that there are various weaving techniques used in making these baskets. These techniques include plaiting, coiling, and twining. In this post, you will learn about woven basket weaving techniques.

Coiling refers to a technique that involves sewing. There is usually a foundation material like split root bundles that are stitched in place and coil upwards. When doing this, they use a pointed tool known as an awl to make a hole in the coil. The sewing process like the shiny outer surface is threaded through the hole and it sews the coil.

You can find some coiled baskets that are tightly woven and can even hold water. In the past, some people used coiled baskets for cooking. Many places are well-known for their unique coiled baskets. These baskets may have decorations of geometric patterns. There is a special technique called imbrication that is used to decorate these baskets.

Imbrication can involve folding the decorative part like bear grass or horsetail root that is under every sewing stitch on the surface of the basket. This imbrication then folds on a basket to resemble corn kernels rows.

Plaiting is also called checker weave, and this is a straightforward process. It involves crossing the weft over and under a warp at a time. Once a plaited item is flat,  like with a mat, it can be hard to differentiate the warp from the weft.

When this weft goes under or over more than a warp, it leads to a decorative pattern called twiling. Remember that plaiting may also be done with a diagonal, weave, or bias. Most twined baskets begin with a plaited bottom. The warp and weft of the plaited bottom may be divided into smaller pieces and can become the warp of the wicker basket sides.

Twining refers to a technique that involves two wefts crossing over each other in between the warps. There are several variations of twining, such as variances in the numbers of wefts, the angle of the warps, and also the number of wafts that are crossed over by the wefts. The surface appearance of the basket changes because of these variations.

Color designs put on the basket can be achieved by overlay or false embroidery. Each of these techniques can add a third and colored weft to the normal two wefts. False embroidery is only done outside the wefts to make the design visible, but only on the outer surface of the basket. On the other hand, overlay is different from false embroidery because this technique involves weaving extra weft into both inside and outside wefts of the basket. Depending on the technique used in the overlay twining, the design can or cannot be visible on the basket’s inside surface

Bed Bugs – The Hidden Danger for Your Home and Health

Benefits of a Home Workout during this Pandemic

The Benefits of Battery Operated Lamps

Different Flooring Ideas and Their Types

Top Benefits of Oak Furniture For Home and Office

Gamification as a Marketing Strategy