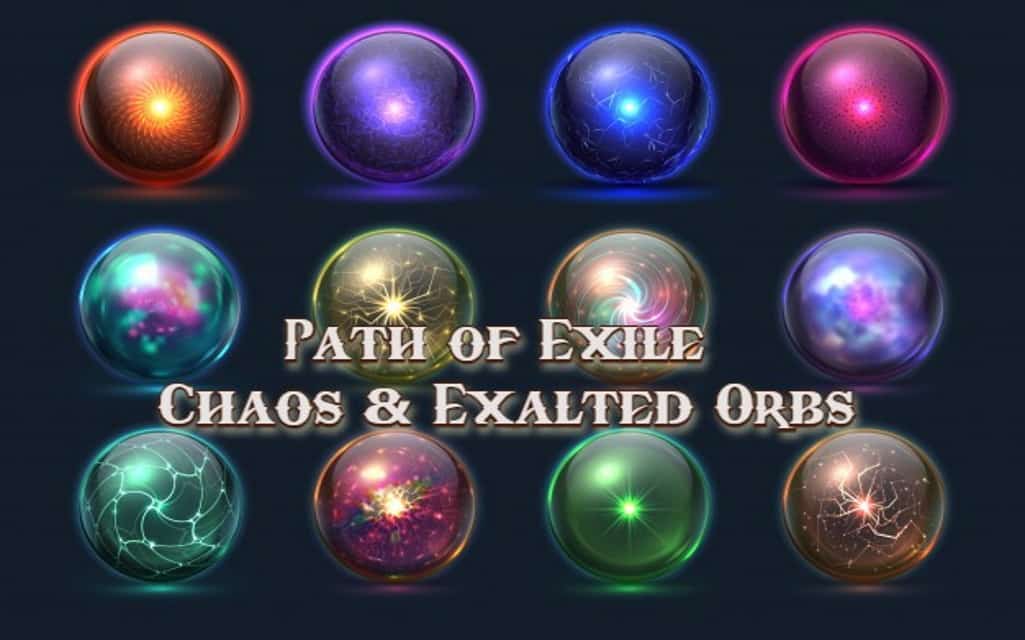 Path of Exile takes a bit of a different route when it comes to in-game money. PoE currency moves away from the likes of gold and coins to opt for other items such as PoE orbs. In this article, we will be taking a look specifically at two different kinds of an orb, known as Chaos and Exalted Orbs.

What are Exalted Orbs?

Firstly, an Exalted Orb is a type of PoE currency that you can use on rare equipment for a new random affix. Along with Chaos Orbs, it serves as one of the game’s currencies as well as Mirror of Kalandra.

The Exalted Orb is a rare item, and you will find it drops from monsters that you have defeated, and can also be found in containers and chests. We mentioned earlier about the Mirror of Kalandra too, and these can be downgraded so that you can acquire more Exalted Orbs.

If you get an Exalted Shard, then you can also get Exalted Orbs by combining them with an orb. This might not bring a profit, however, as they are using influenced items already in the ingredients, which means that they are worth more in trade leagues than the value of the shards. You can also go to the Azurite Mine to farm Gilded Fossils. You then use these fossils to craft PoE items to sell for Exalted Orbs.

To say that the Exalted Orb plays a vital part of the Path of Exile economy would be an understatement. They are mainly used to craft valuable rare items, which makes them very popular amongst players who are trading with each other. So much so, that the majority of trades are done with Exalted Orbs listed with them. Usually, a player trades Exalted Orbs for valuable equipment that they have been searching for.

However, if you happen to be a rich or powerful player, then you will probably be looking to consume them. To do this, you would first use the orb to add a random affix to rare items that haven’t got six affixes already. Alternatively, you can use a certain number of Exalted Orbs through a crafting bench.

What are Chaos Orbs?

As for Chaos Orbs, these PoE currency items can be used if you want to re-roll random modifiers on your rare items and equipment. It has less value compared to the Exalted Orb and the Mirror of Kalandra.

If you want to get a Chaos Orb, then you may have some difficulty as it is rather uncommon. That said, you can get them from monsters that you have beaten, as well as chests and containers. As with the Exalted Orb, you can also get them from Arcanist Strongboxes.

These PoE orbs in particular are great for crafting. This is because they reroll the modifiers and how many there are on a rare item that you have. That being said, this can make life difficult if you are trying to get a certain modifier, as the results can be particularly random. You can choose to adopt a method known as Chaos spamming, in which you would use a number of Chaos Orbs to get the modifiers that you are looking for, or at least trying to get some decent modifiers along the way.

What Are the Differences?

So, by now you have probably guessed what makes these PoE orbs different. The main difference apart from how they work and what you need to remember is the difference in value. Out of the three forms of PoE currency that we have discussed in this article, the Chaos Orb has the least value to it. A good way to look at it is the standard of the currencies when you are trading. With the Exalted Orb, many would consider this to be the gold standard of currency in the trading realm. Meanwhile, you can think of the Chaos Orb as the silver standard.

You should now have a bit more knowledge on just how the PoE currency system works in Path of Exile. Sure, it doesn’t exactly opt for the traditional methods that you normally see in a game such as this. After all, you would be forgiven for assuming that when you are firing up Path of Exile for the first time that you would expect to see the likes of gold coins or something of that nature to have been used. However, this is just yet another feature that sets Path of Exile apart from the crowd. That being said, there are a fair number of features that you could consider to be unique in this game, which is why it is strongly recommended you play it if you haven’t done so already. It’s free to play too, so you have nothing to lose playing the ARPG for the first time.

Have you tried using this Path of Exile orbs? Let us know in the comments section below!

Benefits of Having a Private Mail

Lab-grown diamonds: A new way to say I do

Hand-blown Beauty: The Difference Between Hand-Blown and Machine-Blown Glass Products

Getting to know Thanatos from Greek Mythology

Where Should You Buy E-Liquid From?

What Makes a Smoke Box Perfect for Gifting Purposes?

Looking for the perfect gravestone? Here’s what to consider