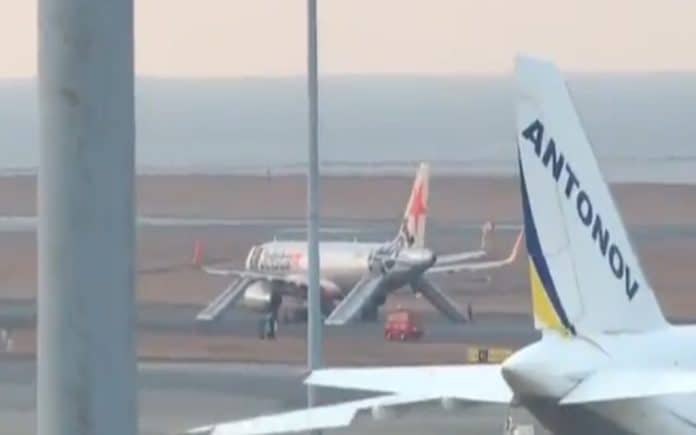 As a result of bomb threats on board, an emergency landing was enacted and at least five passengers were slightly injured while being evacuated from the Japanese airliner.

The Japanese news agency, “Kyodo,” reported that on Saturday, January 7th of 2023 a plane made an emergency landing at the Chubu Airport due to a bomb threat; however law enforcement ultimately discovered no explosives.

A Jetstar Japan flight has made an emergency landing in Japan following an alleged bomb threat.
The flight was travelling from Tokyo but was diverted to Chubu Airport where passengers were evacuated, with some people suffering injuries. #9News
DETAILS: https://t.co/dGId3rHsD1 pic.twitter.com/VrPjAdbF8F

A passenger plane operated by the economic airline “Jetstar” made an emergency landing after 07:30 am on Saturday (Friday 22:30 GMT).

As the agency stated, “The plane began its journey from Narita Airport located close to Tokyo and was headed for Fukuoka Airport in southwestern Japan.”

Narita Airport received a call from a man from Germany at around 06:20 am, saying in English that he had planted a 100-kilogram plastic bomb in the cargo hold of a Jetstar plane, according to the same source.

The local authorities temporarily closed the runway, which delayed or canceled some flights, but the police were unable to find any suspicious items on the plane.

There were 136 passengers and 6 crew members on board.

According to Kyodo, at least 5 passengers were slightly injured while being evacuated from the plane, while no one was taken to hospital.

10 Places in Japan Everyone Should Visit at Least Once