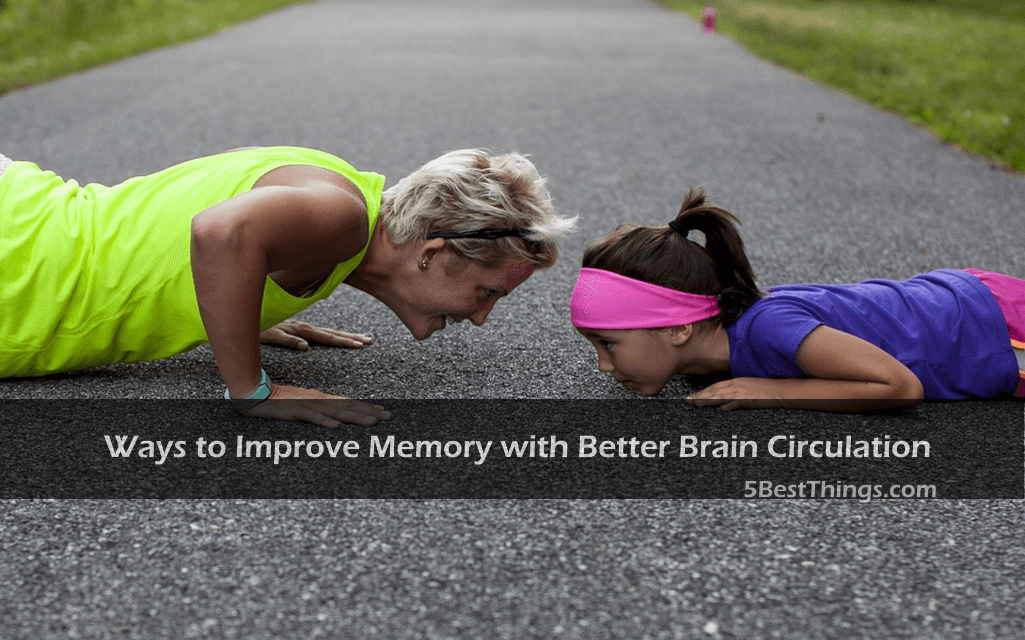 Memories are created through a combination of brain power and clarity, the intake of sensory information, and attention or consciousness. If there is a problem with the brain, memories are not retained. If there is a problem with the sensory system, the eyes, ear, sense of touch, taste and smell then the experience is muted and less easily remembered. If one does not pay attention, say to where they put down their keys, remembering is more difficult. Improving blood flow to the brain, eye, and body can improve the experience of life and the way we remember events. Here are three ways to improve blood flow.

There is a saying—the best exercise is the one that you enjoy because you will actually do it. A recent medical study noted that physical exercise improves blood flow to the brain or cerebrovascular function, particularly in the hippocampus, the seat of memory in the brain.

The beneficial effects of physical exercise on brain health are well documented, yet how exercise modulates cerebrovascular [brain blood flow] function is not well understood. We found that exercise resulted in increases in the normocapnic and hypercapnic blood flow in the hippocampus. Moreover, the change in normocapnic blood flow between pre-exercise and post-exercise was positively correlated to the hippocampal structure volume following exercise. There was no overall effect of voluntary exercise on blood flow in the motor cortex [part of the brain connected to movement].

Often we rely on the connection between our brain and stomach to tell us when we are hungry or when our blood sugar drops but a recent study noted that sometimes our protective mechanisms decrease our awareness of hypoglycemia or low blood sugar. Some of the symptoms of low blood sugar include sweating, nervousness, weakness, extreme hunger and slight nausea, dizziness, headache, blurred vision and a fast heartbeat. The fast heart beat is an attempt by the body to improve blood flow and get nutrients to the muscles and brain. Eating a chocolate bar is a quick solution to low blood sugar but sets up a peak in sugars followed by another drop. Overall this research supports the idea that eating regular meals with complex carbohydrates, good fats (olive oil, fish, avocados), and easily digestible proteins (quinoa, nuts, vegetable proteins) supports balanced blood sugars and strong circulation to the brain.

A further study noted the effect of low blood sugar on working memory.

3. Self-Massage / Acupressure on the top of the Scalp

In Traditional Chinese Medicine, the Baihui or Governing Vessel (GV) 20 is located at the top of the center of the head where a line from the top of the ears would meet. It is also the meeting point of the forehead (frontal bone) and the two sides of the parietal bones at the top of the head. The Baihui has also been described as the uppermost point on the physical body and our bodymind’s energetic core as well as the location of the crown chakra, associated with the color purple. In acupressure or using the fingers to press or rub acupuncture points, the BaiHui is used to clear the senses and calm the Spirit.

Acupressure for Bai Hui consists simply of resting our middle fingers lightly on the point, as support for bringing our mental attention to rest gently there.

Another research study indicated that stimulating the Baihui point improves function in people after a stroke, acting to protect the brain and nervous system (neuroprotector).

If you want to improve circulation to the brain and develop a stronger memory as you age, research indicates exercise, eating right and self massage or acupressure are good ways to start.

3D Human heart – how can it help the medical world?