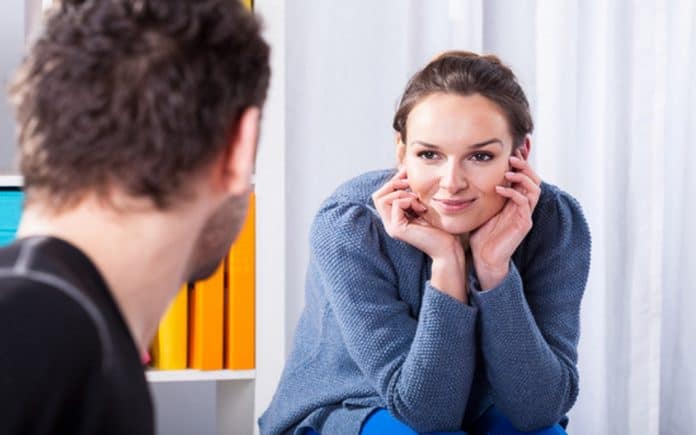 If there’s a guy you’ve started noticing but you can’t seem to catch his eye, you may start to assume that this is one connection you’re never going to make. In reality, he may have no idea that you’ve attracted to him. Letting someone know that you’re attracted to them is mostly psychological, so let us help you catch the eye of the guy you’ve been eyeing by using some psychological tips to help attract the man you like.

Have you ever met someone who kept you guessing? That intriguing lack of information can have you wondering about someone all the time.

We are often encouraged with social media and celebrity over sharing to tell people everything there is to know about ourselves, but by withholding aspects of yourself, you can build an aura of mystique that will have him thinking about you.

Mimicking someone’s gestures can subconsciously increase that person’s interest in you. Mirroring is a natural phenomenon that happens between people who are close, be that as friends or more. The closer emotionally you are to a person, the more that you will move like them when you are together.

This doesn’t mean playing copycat with them, but taking a subtler approach that includes leaning forward when they do or touching your hair when they do.

3Have a date on a sunny day

Beautiful, warm weather stimulates your brain to produce endorphins, making you feel happier. If you choose a day to spend some time with your crush, try to make it one when it’s warm and bright. Hanging out during that endorphin producing weather will help him associate that happiness with you.

If you’re still trying to catch the eye of your crush, try wearing red. The color red has been shown to attract a man’s eye and remind him of more passionate things. Red lips and red clothing will draw men in and make you seem more vivacious and appealing.

You may have thought that legs, abs or butts where the thing to attract men, but a recent study has shown that men are drawn to women with long, toned arms. Toned arms were rated as desirable by men across all cultures, so get out those weights and tone up those triceps.

Don’t play dumb to attract a man. The only time men want dumb women is if he’s only using you for your body, and then you wouldn’t really want him anyway, would you?

Stay abreast of current affairs, have educated opinions and voice them and be confident in your intelligence. Nothing is sexier than a smart, confident tone

A gentle, fleeting touch can instantly make men feel more comfortable with you and more willing to flirt. Friendly touching breaks barriers and crosses over from a purely platonic relationship to opening the door for more. A lingering hand on his shoulder after he gives you a hand may have him thinking of you long after you’ve gone.

While eye contact has long been known as an intensely powerful way to have someone notice you, eye contact without a disarming smile can actually come across as combative or creepy. So when you maintain that eye contact, pair it with a charming smile to let him know that you are open and willing to have a conversation.

Body language plays a huge role in how other people perceive us and this is especially true when it comes to romantic relationships.

If you want your crush to notice you, you’ll have to take notice of your body language towards him. Leaning in as he talks and facing him with your body without crossing your arms lets him know that you are interested in what he’s saying.

10Go from the left

This may seem a little far-fetched, but research from Sam Houston State University has found that men are more open to emotionally charged words when they are spoken into his left ear. Whether that is because the left side of the brain has often been associated with emotion, it’s worth a shot to switch sides and drop hints from the left.

Signs Someone Might be Lying to You: How to Detect Lies

Modern world relationships and how they have changed

5 Signs You And Your Partner Needs Marriage Counselling

HOW TO CATCH A CHEATING SPOUSE?