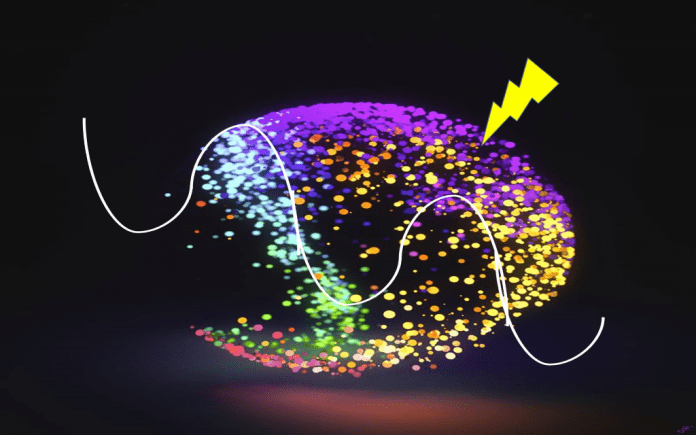 Feeling the energy or listening to the frequencies of the Schuman resonance are associated with health in a variety of brain disorders. Schumann resonances are also known as Earth frequencies because they are a natural portion of the Earth’s electromagnetic field. They are generated and excited by lightning discharges in the cavity formed by the Earth’s surface and the ionosphere. The Schumann resonance is one of the Solfeggio frequencies, which make up the ancient scale thought to have been used in sacred music like Gregorian Chants. What if listening to Gregorian chants or certain sound frequencies could change your symptom picture or even your DNA and create a healing spiral?

Reiki practitioners may be tuning into or channeling the earth’s own energies to facilitate healing in their clients with multiple sclerosis or other brain health issues, including chronic pain and fatigue. A 2013 study that looked at the electromagnetic field of Reiki practitioners noted,

Practicing Reiki does not appear to routinely produce high-intensity electromagnetic fields from the heart or hands. Alternatively, it is possible that energy healing is stimulated by tuning into an external environmental radiation, such as the Schumann resonance, which was blocked in the present study by the strong magnetic shielding.

Journal of Alternative and Complementary Medicine (2013)

An earlier study by N. J. Cherry considered the possibility that we take in natural frequencies from the earth to help stabilize our brain and react intelligently to our environment. They described the brain in this way,

The human brain is a biological organ. On one hand it is soft, flexible and adaptive, but on the other hand is relatively stable and coherent with well developed intelligence. In order to retain intelligent thinking in a soft and adaptive organ there needs to be a constant, globally available, synchronization system that continuously stabilizes the brain. Rapid intelligence and reactions requires and electromagnetic signaling system, supported by a biochemical system. The Schumann Resonance signal provides a brain frequency range matching electromagnetic signal, providing the synchronization needed for intelligence.

Some disease processes are cyclical, like skin malignant melanoma. They vary in a pattern over time. Other diseases, like multiple sclerosis are found in certain areas, “the M.S. Belt” of the moderate or temperate zones of earth. Researchers are looking at how earth energies are related to these patterns and how imbalances in the energies and our relationship to them can cause dysfunction. One study entitled, ‘Cyclic patterns of incidence rate for skin malignant melanoma: association with heliogeophysical activity’ noted,

5Circulating Earth Energies in the Brain

How are we related to the earth we live on? Does sustainability of the plants, animals, and energy fields really matter to us? How is our brain affected by the energy in the earth surrounding us? The answers to these questions may mean the different between life and death in the future. Today the answers influence at least the health of our brain. Scientists are finding some similarities between the energy circulating in our brain and the energy circulating on the earth. In a study that took place in Sudbury, Canada and Cumiana, Italy, researchers noted,

In 1954 and 1960 Koenig and his colleagues described the remarkable similarities of spectral power density profiles and patterns between the earth-ionosphere resonance and human brain activity which also share magnitudes for both electric field (mV/m) and magnetic field (pT) components. When global cerebral measures were employed, the first (7-8 Hz), second (13-14 Hz) and third (19-20 Hz) harmonics of the Schumann resonances were discernable in averaged whole brain quantitative electroencephalography profiles in some but not all participants. Our results confirm the measurements reported by earlier researchers that demonstrated unexpected similarities in the spectral patterns and strengths of electromagnetic fields generated by the human brain and the earth-ionospheric cavity.

Listening to and feeling the vibration of the Schumann resonance has been found helpful in brain conditions like Multiple Sclerosis. In several brain conditions, including M.S. the symptoms tend to worsen in higher temperatures such as during the summer. Perhaps there is an aspect of brain energy which like the Schumann resonance is influenced by temperature. There is also an odd correlation with certain latitudes (temperate latitudes of the western hemisphere). Could this be temperature and global electromagnetically related? In a Science article from 1992, researchers noted,

What is interesting to me about these frequencies is that while I was writing this article I couldn’t do it with the frequencies playing in the back ground but if I listened to them relaxing with my eyes closed I felt calmer and more energetic afterwards.

Here are a couple of videos where you can listen to these frequencies.

Which Products May Release the Pain from Your Back After Sleeping