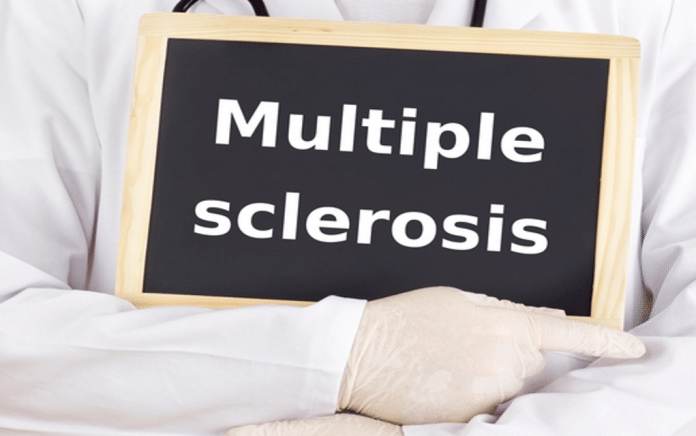 This acupuncture point is the thirty-fourth point on the Gallbladder meridian which travels from the face down through the body and along the outside of the leg. GB-34 is located just below the knee on the outside of the leg. Acupuncture of this point would consist of using a very fine needle inserted into this point. An acupuncturist might choose this point to work on restoring gallbladder health or eliminating a symptom of gallbladder dysfunction, which can range from digestive issues to leg pain.

“Use of acupuncture to treat multiple sclerosis (MS) is fairly common. A literature search resulted in twelve peer-reviewed articles on the subject that examined the use of acupuncture to treat MS related quality of life, fatigue, spasticity, and pain. Although many of the studies suggested that acupuncture was successful in improving MS related symptoms, lack of statistical rigor and poor study design make it difficult to draw any conclusions about the true effectiveness of this intervention in the MS population. Further studies with more rigorous designs and analysis are needed before accurate claims can be made as to the effectiveness of acupuncture in this population.” (Evidence-Based Complementary and Alternative Medicine, 2014).

This Governing vessel point is located in the lower back area on the spine just below where the last rib (rib 12) attaches to the spinal column. One exercise to stimulate the governing vessel and the corresponding conception vessel is to place the tip of your tongue on the gums inside the mouth above the upper teeth. The governing vessel travels from the upper teeth along the midline of the body over the head and down the spine. In the pelvic area the energy flows from the governing vessel into the conception vessel and travels up the midline of the belly, chest and face to the tongue. The following article, “An experimental electro-acupuncture study in treatment of the rat demyelinated spinal cord injury induced by ethidium bromide,” noted the benefit of two governing vessel points in stimulating the immune system and may even help remyelinate the spinal cord. Myelin is a fatty layer around the spinal cord which helps the nerve signals to travel more efficiently. In people with multiple sclerosis often there is a loss of this myelin sheath leading to issues with balance, fatigue, and movement.

Electro-acupuncture stimulation was performed at two acupoints in governor vessel: Jizhong (GV6) and Zhiyang (GV9). Electro-acupuncture treatment can promote Neurotrophin-3 expression, increase of the cell number and differentiation of endogenous OPCs and remyelination in the demyelinated spinal cord as well as the functional improvement of demyelinated spinal cord. (Neuroscience Research, 2011).

Large Intestine 11 is an acupuncture point on the large intestine meridian at the bend of the elbow on the same side of the arm as the thumb. Acupressure or touch can be used on reflex points. Rub the outer side of your elbow. Do you feel any tender points? Does pressing or rubbing this area change how your legs feel or how you walk? In the book,  “Acupuncture for stroke rehabilitation: three decades of information from China” HPY Chan said,

Also known in Chinese as Toulinqi and is found on the gallbladder meridian above each eye and forehead near the hairline. In a technique called Emotional Freedom Technique or EFT tapping, the client taps on points above the eye in the eyebrow near Gallbladder 14 and on the side of the eye near Gallbladder 1. EFT is done to release emotional or physical pain and consists of taping on certain points while saying phrases like, “Even though I have muscle pain I love and accept myself” or “Even though I am too tired to get all my work done, I honor all the things I accomplished yesterday.” The gallbladder meridian and acupuncture points start near the eye and are also considered to be good for improving vision and conditions like nystagmus (jumpy eyes) and macular degeneration. In this study, “Clinical experience of Qin’s eight scalp needles for treatment of Parkinson’s disease” researchers noted the benefit of acupuncture points related to the gallbladder (GB) meridian which runs along the outside of both legs and the Governing Vessel (GV), which circles the center of the back of the body before connecting to the Conception Vessel, which circles the front of the body,

“Based on his years of clinical experience, it is proposed by Professor QIN Liang-fu that the Governor Vessel is mainly for miscellaneous disease and disease of limbs. Combined with distribution of cephalic (head) motor region and meridian, an acupuncture treatment plan that is full of innovativeness is proposed, which is called Qin’s eight scalp needles. It includes bilateral Fengchi (GB 20), Shuaigu (GB 8), Toulinqi (GB 15) as well as Yintang (GV 29) and Baihui (GV 20), mainly for treatment of nervous system diseases, such as Parkinson’s disease and multiple sclerosis.” (Zhongguo Zhen Jiu, 2014)

“Chinese scalp acupuncture integrates traditional Chinese needling methods with Western medical knowledge of the cerebral cortex and has been proven to be a very effective technique for treating multiple sclerosis and other central nervous system disorders. It can not only relieve symptoms, increase the patient’s quality of life, and slow and reverse the progression of physical disability but also reduce the number of relapses and help patients with multiple sclerosis to remain in remission.” (Global Advances in Health and Medicine, 2013).

This gallbladder point is located in the back of the head on either side of the spine at the level of the upper ears. Ways to stimulate this point include electro-acupuncture, heat, or light. Some complementary medicine practitioners use colored light from a device that looks a bit like a flashlight to stimulate acupuncture points. A cold infrared laser and colored light can also be used. Each of the five paired meridians have a color associated with them. Green is the color associated with the liver and the gallbladder meridians. Another way to balance the energy in these two meridians is to notice what is green around you. As you walk or drive, notice all the things that are green: cars, trees, bushes, clothing, signs, etc. An article from 1999 notes the benefits of colored light therapy, colorpuncture (use of colored light without needles on acupuncture points) and chromo-pressure (pressure and color on the points).

“Light therapy has a long history, dating from ancient Egypt to the contemporary treatment of seasonal affective disorder. In the early half of this century, Dinshah Ghadiali, MD PhD, refined a sophisticated system of color therapy. Influenced by a strong background in mathematics and physics, he determined specific “attributes” of the colors of the spectrum, i.e., their specific effects on human physiology. Of particular note is recent Russian research which has shown that light is conducted within the body along the acupuncture meridians leading the authors to ponder: Do acupuncture meridians function as a light (photon) transfer system within the body, not unlike optical fiber?” (American Journal of Acupuncture, 1999).

So, for relief from fatigue, muscle weakness, pain and other symptoms of multiple sclerosis try rubbing acupuncture points, visualizing colors, touching the tip of your tongue to the roof of your mouth, or see an acupuncturist.

5 tips on how to sleep comfortably and healthily