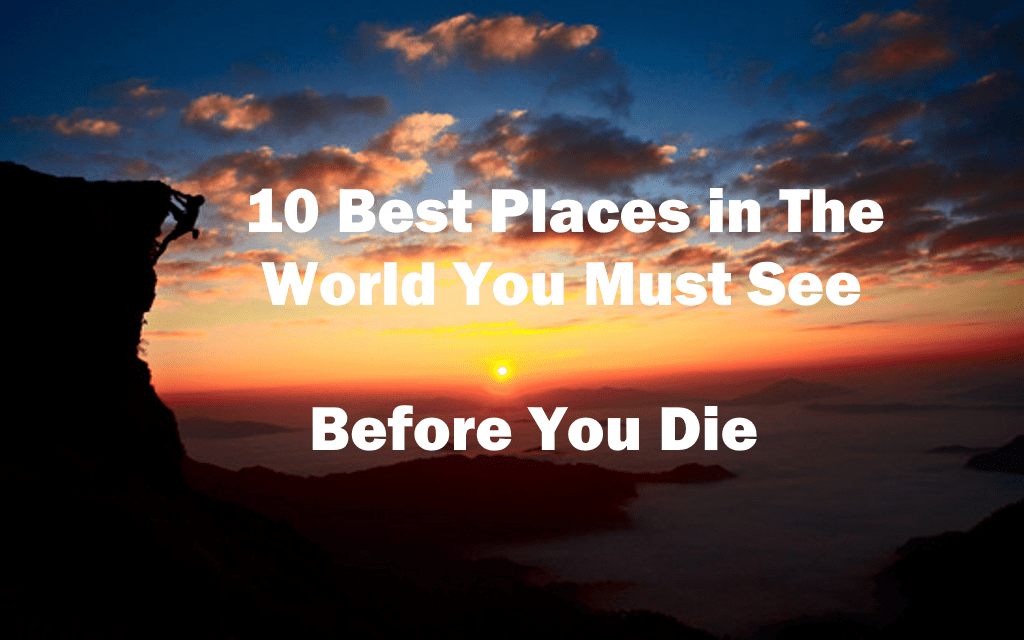 Travel is an amazing thing. Going places you are unfamiliar with forces you to rethink the way you see the world and keep an open mind. You’ll have to ask for help, try new foods and learn new things very quickly and you will be all the better for it. Finding places to travel to is a simple task, the world is your oyster, but perhaps you’re looking for something more? Maybe you want to see places that have defined culture, shaped countries and altered the way we interact with nature and see the world. If so, read on to find the 10 best places in the world you must visit before you die.

Paris may be the City of Lights and the City of Love, but it is also one of the most culturally rich cities that the human race can offer. Founded in the 3rd century BC, Paris became one of the largest cities in the world by the 12th century and a major trading centre. Located within the city are major art museums, iconic buildings and the roots of famous French cooking, music and cultural revolutions. Paris, France is a memorable city to visit any time of the year but is often most highly praised in spring. It is also an easy location to access, since it is a major city and commerce location.

Off the coast of Queensland, Australia is the Great Barrier Reef, the largest reef in the world. It spans 2,600 kilometres and is the largest living structure on earth and home to more than 1,500 species. It is considered one of the Seven Natural Wonders of the World.

This massive underwater wonderland is considered the best place in the world to snorkel or dive. You will see wondrous creatures and flora and fauna that will leave you speechless.

As with many items on our list, human damage has taken its toll on the Great Barrier Reef. Pollution, climate change and overfishing has greatly affected the Great Barrier Reef and continued advocacy and protection efforts are required. When visiting, make sure you go with a reputable source that endeavours not to damage the reef further.

It was once the wild plains of elk, buffalo, bears and wolves and has remained one of the most uniquely stunning and dangerous display of geysers in the world. Its beauty was such that it was the reason Ulysses S. Grant created the first national park to protect this area. Yellowstone is a very important natural landmark not only for itself, but also for the conservation and advocacy concerning natural landmarks that would eventually span the world.

Romance abounds in Venice! The very mention of the name evokes images of gondolas, quiet and dark waterways and magnificent buildings. The floating city is a historical gem and will allow you to see Gothic and Byzantine Palazzos, impressive museums and magnificent artworks.

The capital of Italy’s Veneto region has no streets, only canals filled with the water of the Adriatic Sea snaking between its buildings.

Global warming has begun to take a toll on Venice though. Rising sea levels mean that this ancient and culturally significant city may be facing desertion and eventual extinction, so it’s important to go while you have the chance!

The majesty of Angkor Wat cannot be captured in pictures, it can only be seen under the misty sunrise over the peaks of the ancient religious monument.

Buried in the forests of Cambodia, Angkor Wat is a temple complex dating back to the 12th century. Since then, this UNESCO World Heritage Site has become a national monument and is even featured on the country’s flag. Increased tourism has provided further funds for the upkeep and restoration of this magnificent complex, so while you will see wear and tear, you will also see the efforts that have gone into maintaining the space.

Keep in mind to wear clothing that protects you from the sun and heat and refrain from touching the delicate ancient carvings.

Many mysteries surround the construction of the pyramids of Giza but you should consider visiting their monolithic mausoleums for all we’ve learned from them. Standing just outside the encroaching borders of Cairo, Egypt, the pyramids of Giza date back to 2,560 BC. The Great Pyramid of Giza was the tallest man-made structure in the world for about 38 centuries and was originally filled with an abundance of treasures and stores to help royalty in the afterlife.

To visit the pyramids, some travellers suggest it is better to go with a guided group, which will allow you to avoid taxis and some of the more common scams surrounding tourism and the pyramids.

Located 600 miles off the South American coast, this archipelago of Ecuador was made forever famous by the findings of Charles Darwin, who was able to use species on the island to prove his theory of evolution. The Galapagos Islands are home to an incredibly diverse array of flora and fauna that are found nowhere else on Earth. Today, 97% of the archipelago’s land mass is part of a protected national park. Visitors can see the animals and plant life on guided boat tours, scuba expeditions and hikes, where curious creatures often approach tourists without hesitation, since they have no reason to fear man.

When American historian Hiram Bingham first saw Machu Picchu rising from the fog some 8,000 feet above sea level in 1983, we can only imagine his wonder as he beheld the remains of the Inca Empire at the peak of its power and achievement. Since then, Machu Picchu has become a popular pilgrimage for tourists, many of which choose to take the 6-day hike Bingham himself first took. If you’re not up to the hike, a train ride from Cusco takes only a few hours.

At midday, the site will often be its busiest with mingling crowds and this can get busy since 75,000 people visit Machu Picchu a year.

We would heavily recommend that you do the hike, as it winds through the mountains and allows you to really get a feel for what a stronghold and wonder Machu Picchu was an is. Keep in mind, this trek can no longer be done independently and guides must be hired.

Located in Uttar Pradesh, India, the Taj Mahal is an architectural love letter. The Taj Mahal is actually a mausoleum built by emperor Shah Jahan in the 17th century to hold the body of his most beloved third wife. It took 22 years to complete and required over 20,000 workers and 1000 elephants to transport materials.

To visit this incredible structure, you’ll have to walk or hire a tuk-tuk, since no polluting vehicles are allowed within a mile of the structure. Consider hiring an onsite guide, as the Taj Mahal’s history is as vast as the building.

The Great Wall of China is a UNESCO World Heritage Site, is 21,196 km long and passes through 156 countries with 7,062 lookout towers. It is one of the greatest feats of architecture mankind has ever built.

Built as a defensive barrier against invading tribes in the west, the Great Wall is now maintained as a historical and cultural icon and sees thousands of visitors per year.

Visiting this wonder of the world will mean large crowds but spring and autumn can offer a slight reprieve from the cost of visiting the wall, if not from the crush. Coincidentally, this is also the most colourful time of year to visit the wall.