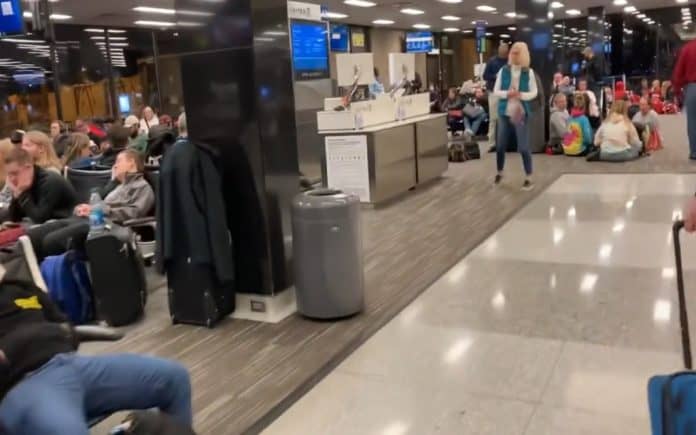 Video clips showed chaos inside US airports, which suspended all flights due to a malfunction in the Federal Aviation Authority system.

And US airport halls appeared to be stacked with stranded passengers due to the suspension of flights, while President Joe Biden asked the Department of Transportation to conduct a full investigation into the reasons.

Look inside the Grand Rapids airport, taken by a friend who’s on her way to Orlando, flying American Airlines. She said they’re not being told anything, no updates. pic.twitter.com/wwTwXCBaRZ

The White House has declared that, for the time being, there is no proof of a cyberattack regarding Wednesday’s technological glitch which forced US authorities to stop all domestic flights. President Biden was communicated about any advancements in this issue.

We’re getting a look at what the gate area looks like here at Eppley airfield.

Hundreds of people are sitting and waiting for an update as flights across the country are grounded due to a FAA. system failure. @KETV pic.twitter.com/8GnRXEPhj4

This morning, the Secretary of Transportation provided an update to the President regarding the Federal Aviation Administration (FAA) system outage. At present, there is no indication that a cyberattack has occurred and ongoing updates will be supplied by the FAA. According to White House spokeswoman Karen Jean-Pierre via Twitter, this was reported earlier today.

American Airline worker telling passengers it’ll be a 2-4 hour delay to get things back to normal once flights can leave again at 9am. Passengers can wait or rebook for another day, frustration growing now #GoodDayColumbus pic.twitter.com/R9ampqo5Wy