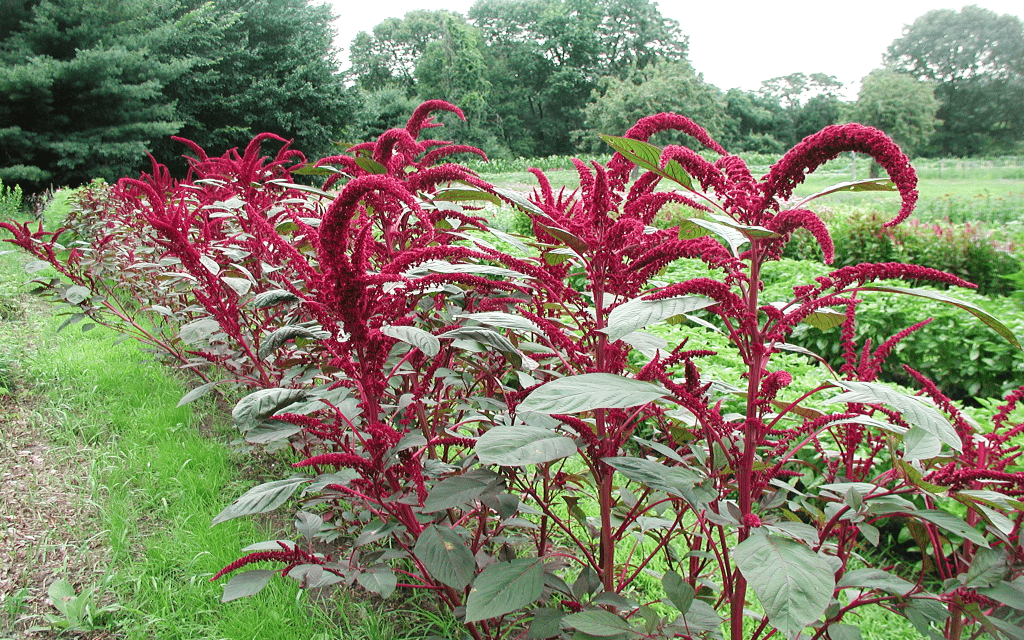 Gardeners know its red fluffy flowers. Vegetarians know the grain as a complete protein and people with celiac know it is one of the gluten-free grains. The bright red leaves are also edible. When the leaves are small and new they can be eaten raw in a salad like lettuce. As the leaves get larger and a little tougher, they are more flavorful and can be cooked like spinach. The plants themselves are beautiful bright red additions to the garden.

According to a recent Sierra Club article,

“Amaranth flourished 6,000 to 8,000 years ago in Mesoamerica, where the Aztecs called it huautli and used it in numerous religious rituals. Scornful Spanish conquistadores outlawed its cultivation, but thanks to its hardiness, amaranth eventually made a worldwide comeback. In Mexico, people commonly mix it with honey for superfood Rice Krispies–style treats.”

Amaranth seeds can be popped like corn or puffed rice. Companies trying to preserve the nutritional value after the heating process have developed a way to pop amaranth seeds in bulk using hot air somewhat like an air popper for popcorn.

“The results showed that the treatment did not affect the content of B-group vitamins, and the recovery for essential and trace elements was 96-97%. This popping system is useful for processing amaranth seeds in terms of the product quality and nutrition.”

Another study found that amaranth can help decrease atherosclerosis and other kinds of cardiovascular disease.

“Atherosclerosis is considered a progressive disease that affects arteries that bring blood to the heart, to the brain and to the lower end. It derives from endothelial dysfunction and inflammation, which play an important role in the thrombotic complications of atherosclerosis. Cardiovascular disease is the leading cause of death around the world and one factor that can contribute to its progression and prevention is diet.”

Researchers concluded by focusing on the way amaranth positively affects the proteins and cells associated with certain pathways in the cardiovascular system.

Whether you grow amaranth for the leaves, the grain or the beauty, it is a great plant for gardens where water is at a premium. Once the seeds have started the plants are quite drought tolerant. Reports vary but it does not seem to be deer resistant.