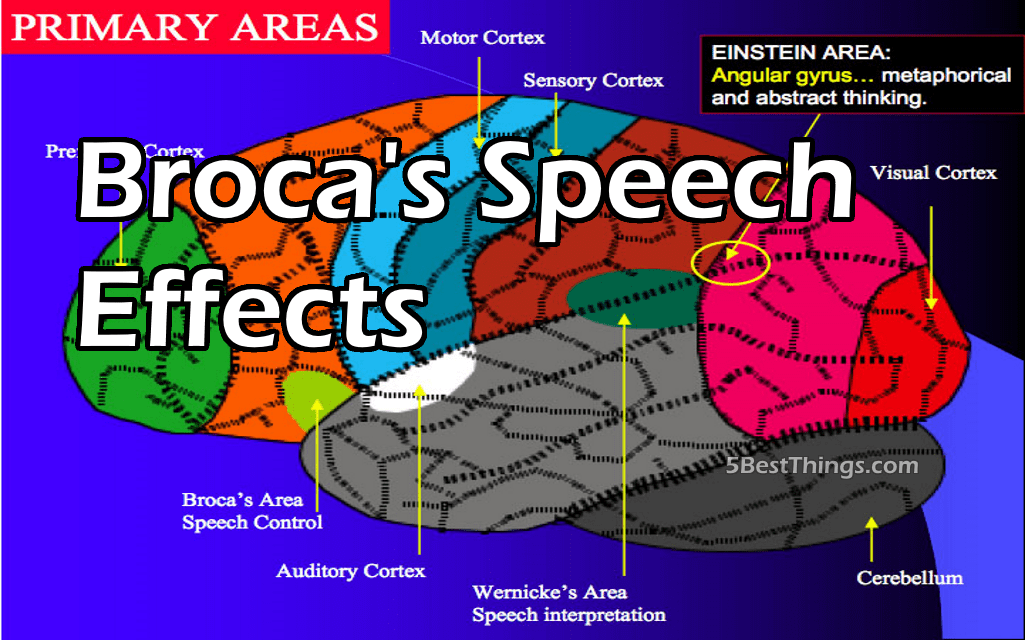 There is less than a one percent difference in human genetic makeup when compared to other primates and yet there is a significant difference in both intelligence and language capabilities. A recent study found a greater white matter connectivity in the developing and mature human brain with the respective structures in the nonhuman primate brain, specifically in Broca’s speech area. They concluded,

This neural circuit may thus be fundamental for the human syntactic capacity as the core of language.

Here are five arenas where Broca’s speech area which is near the side of the head and ears, has an impact on health and wellness. It is part of the frontal (cognition) lobe but is very close to the temporal (hearing) and parietal (sensation and movement) lobes of the brain.

The actions of walking and talking activate Broca’s speech area. The faster one walks the more coordination is required between the frontal lobe which houses Broca’s speech area and the parietal lobe, which houses the sensory – motor (movement) cortex. In this study, the participants performed two single-tasks, including walking at different speeds, (three and five km/h) and a dual task where participants had to talk while walking at a rate of three kilometers per hour). They found that the more complex or difficult the task the more areas of the brain were involved. It is interesting to note that in some movement disorders like Huntington’s ataxia the ability to talk while walking is lost as symptoms progress and therapies that minimize symptoms increase both the ability to walk and improve speech.

The results show an increase of activation in Broca’s area during the more advanced conditions (single task 5km/h vs. single task 3km/h); (dual task vs. single task 3km/h) and (dual task vs. 5km/h), while the corresponding area on the right hemisphere was also activated. Dual task paradigms including a cognitive task in conjunction with whole body movements elicit wide-spread cortical activation patterns across fronto-temporo-parietal areas.

Another study compared the ability of humans to recognize one’s own reflection to other animals, including chimpanzees. Researchers found more connections between the Broca’s area of the frontal lobe and the sensory and movement areas of the parietal lobe.

In humans, self-recognition involves a distributed, right-lateralized network including frontal and parietal regions involved in the production and perception of action. The superior longitudinal fasciculus (SLF) is a system of white matter tracts linking these frontal and parietal regions. Notably, superior longitudinal fasciculus III’s terminations in Broca’s area are not right-lateralized or particularly pronounced at the population level in chimpanzees, as they are in humans. These results suggest that self-recognition may have co-emerged with adaptations to frontoparietal circuitry.

Broca’s speech area in involved in speech fluency. Blood flow to this area is important. In a recent study on children and adults with developmental stuttering researchers noted,

Significant differences in the ratios of regional cerebral blood flow and global cerebral blood flow before and after electro-acupuncture. A treatment benefit in different lesions were observed (in the left prefrontal cortex; in the right prefrontal cortex; in the left temporal lobe; in the right temporal lobe; in the left Broca’s area). After electro-acupuncture treatment, the patients exhibited symptomatic relief.

In first episode patients [people who have only had one episode of the delusions of schizophrenia]  90% of the functional-connectivity changes involved the frontal lobes, mostly the inferior frontal gyrus including Broca’s area, and these changes were correlated with delusions/blunted affect. For chronic patients, functional-connectivity differences extended to wider areas of the brain, including reduced thalamo-frontal connectivity, and increased thalamo-temporal and thalamo-sensorimoter connectivity that were correlated with the positive, negative, and general symptoms, respectively. Thalamic changes became prominent at the chronic stage.

The frontal lobe including Broca’s area can benefit from exercises that activate the functions of the frontal lobe: word games, list making, planning, patterned movements like ballet, taichi, qigong, bowling, and obstacle courses. As seen earlier walking or doing a movement exercise while talking may also stimulate function of Broca’s speech area.

Raising a Child with Autism: How to Ease Stress Levels