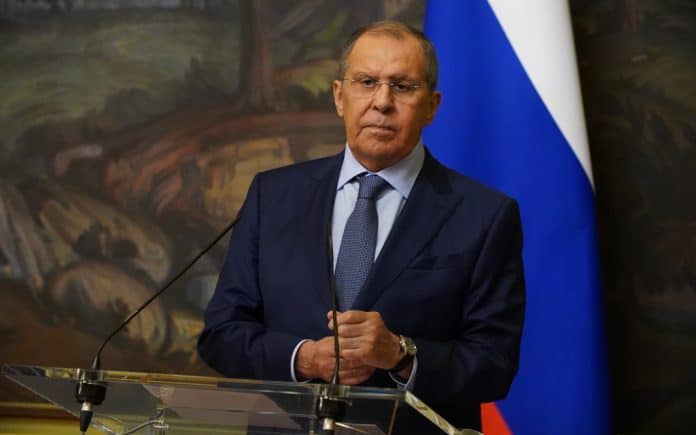 In a blunt warning, Russian Foreign Minister Sergei Lavrov accused the United States of attempting to assassinate President Vladimir Putin and cautioned that such an action could result in direct conflict between two nuclear powers.

Today, Tuesday, Lavrov unequivocally warned of the consequences of any plot to assassinate President Putin in an interview with Russian news agency “TASS,” citing statements made by US Department of Defense (Pentagon) officials that describe such a plan as ‘cutting off his head’.

The Russian minister declared that Moscow is eager to address security issues concerning Ukraine, but only when Washington acknowledges the fruitlessness of its current approach.

According to Lavrov, the administration of US President Joe Biden has made it clear that they are seeking a strategic defeat against Russia, making it impossible for communication between the two entities. He also accused Washington of providing intelligence information to Ukraine and participating in military operations there. Furthermore, he claimed Western private military companies have been working side-by-side with Ukrainian forces as well.

According to the Russian Foreign Minister, solutions for ending this disagreement have already been proposed by Moscow; “disarmament” and eliminating what he referred to as a “Nazism” in Ukraine. He implored Ukrainian authorities to take action against anything posing danger towards Russia’s safety, because if not then it will be left up to their army on how this matter is resolved.

During the interview, Lavrov asserted that the U.S and NATO seek to conquer Russia for their own strategic purposes, aiming to cripple and obliterate it in one fell swoop.

He feared that the West’s strategy in Ukraine could lead to a direct military confrontation between two nuclear powers.

According to the Russian minister, Washington is at the heart of tensions in Ukraine; he implied that America seeks to maximize its benefits from this situation.

During his meeting with Russian media representatives in Moscow on Monday, Lavrov declared that gradually the West’s capacity to lead the global economy is declining – a situation which will inevitably require them to negotiate with Russia at some point “whether they want it or not”.