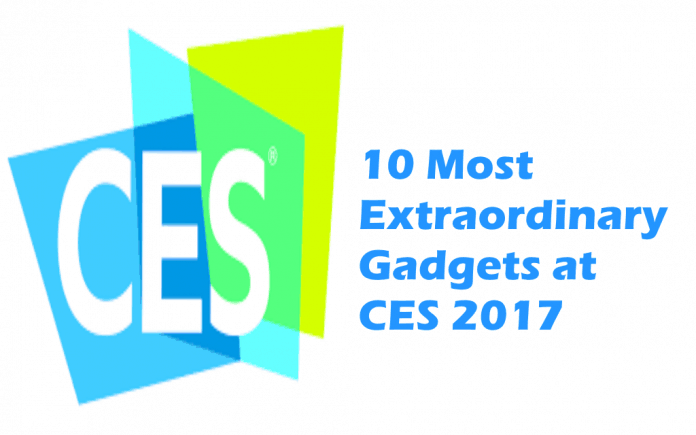 Consumer Electronics Show in Las Vegas is over and now it’s time to introduce you to some tech gadgets that caught our attention. What would you think about a laptop with three displays, cute home assistant or smart breast pump? Yes, these gadgets (and much crazier) are real. Let’s check it out!

Project Valerie is a gaming laptop with three 4K displays. When you look at the laptop from the side, you would see a pretty thick case with a 17.3-inches display. But suddenly two extra displays pop out from the display case and you’ll see three beautiful 4K displays. Razer calls the pop out technology ‘an automated deployment mechanism’ and the whole laptop feels like a dream for gamers. Displays are powered by Nvidia GeForce GTX 1080 graphics card that is currently considered as the best GPU you can find in laptops. Project Valerie is just a concept or prototype, if you want, and it might never be selling on the consumer market.

Drones are on the market for a long time and many people would assume there’s nothing to innovate. Wrong, PowerRay took a different approach and created an underwater drone. Why? The main purpose of drones is video recording. And who wouldn’t be interested in shooting a video of sea life especially if you’re on vacation near a sea? PowerRay Aquatic Drone can dive up to 30 meters and streams 4K video with additional data to your phone through Wi-Fi.

Plume Flow is like a fitness band for checking and tracking air quality. Actually, it’s the first wearable air quality tracker that you can clip on a bag or bike. Flow tracks things like PM2.5 (particulate matter and dust), nitrogen dioxide, ozone, VOCs, temperature, and humidity. Plume integrated 12 color LEDs to tell you about the pollution of the last 12 hours. You can also pair it with your smartphone through Bluetooth Low Energy.

Do you find standard alcohol testers boring and maybe a little bit awkward? Well, then BACtrack Skyn is here for you. It’s an intelligent wristband that measures the amount of alcohol in your body. The purpose of the device is to prevent a hangover and tell you when to STOP drinking. You don’t have to blow to get results, it monitors alcohol or ethanol molecules through your skin.

Mayfiel Robotics created a very cute intelligent helper for your house. It looks like a robot from a new Pixar movie. The robot can understand the context and even the specific person. When you ask a question, Kuri responds with facial expressions and head movements. With an integrated camera, Kuri can serve as your house guard when you’re away. Kuri is also a good music player since it can play music through the built-in speakers.

6Spartan Smart Pants – Protect your genitals with these pants

Spartan Pants were designed with an idea that radiation from your smartphone can be harmful to your genitals. The pants were created by two french entrepreneurs and are made of cotton fabric with woven silver in. They claim that the pants creates “electromagnetic shield” to protect your testes against harmful rays. Spartan also says that silver in the cotton makes these boxers antibacterial. Boxers will be selling for 45 dollars.

Willow Breast doesn’t require a power cord since it doesn’t use an electricity. Thanks to this device women can produce and store milk on the go without a need to charge. Women don’t need to undress because it can be easily hidden under a bra. Willow Breast comes with 24 disposable milk sacks in the box, and it’s priced at $430.

4moms, an American company, announced a stroller for modern parents to get more out of trips with a baby. It doesn’t have to be charged because it uses the kinetic energy of its wheels, so you can always charge your phone, track your distance or light your path with headlights. The stroller isn’t cheap, it competes with other high-end strollers, and that’s why Moxi costs about $700. The seat can be reoriented in three ways – forward, backward or lie flat for young infants.

Would you ever think that hairbrush could have smart features? No? Then you’re not alone. This styling tool was introduced at the CES event by Kerastase and Withings. They created the Hair Coach to help you take better care of your hair. It will provide you with tons of data as you brush through your hair. If you find it stupid and useless, bear in mind that it received this year’s International CES Innovation Award.

What’s so unique about Vinci Headphones? Display and Artificial Intelligence. Displays that are fitted on the side of the headphones are based on artificial intelligence. You can control it with your voice. It runs on Vinci OS, so that means you don’t need a smartphone to play your music. Connect it to Wi-Fi or network, but you can also play music offline from 32 GB internal storage. The headphones can serve as your fitness tracker since it also tracks your heart rate or speed of your run. Vinci Headphones costs only $199.