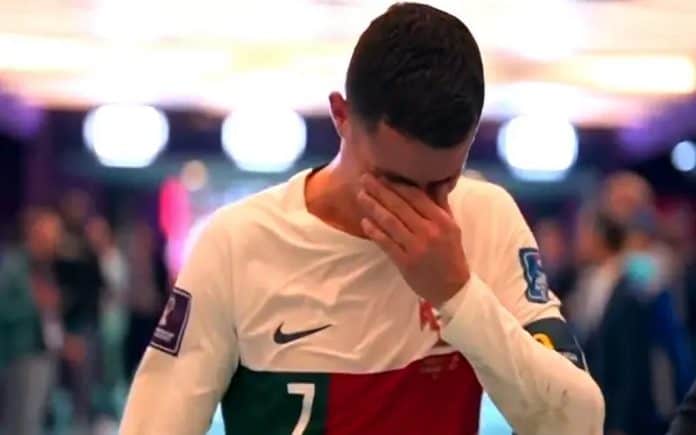 Tears of sorrow filled Cristiano Ronaldo’s eyes as he said goodbye to the Qatar World Cup after a heartbreaking 1-0 loss against Morocco in the quarterfinals at Al Thumama Stadium.

This Man Doesnot need to Proof anything to anybody, he has done enough on pitch for the coming Generations that can relish it for long time. He deserved Better. Feeling for him💔

The cameras captured the “Don” as he exited the stadium in tears, his face hidden beneath his hands and an assistant by his side.

The Dream is Over for Cristiano Ronaldo and Portugal.
Cannot see him like this. 🥺 pic.twitter.com/pcSRA4evmO

On Saturday, Morocco made history by becoming the very first African national team to reach the World Cup semi-finals when they beat Portugal 1-0. This huge accomplishment likely means that Cristiano Ronaldo’s opportunity of taking home football’s most renowned accolade will be lost in thin air.

Youssef En-Nesiri secured the winning goal in the 42nd minute, keeping Morocco’s unexpected journey alive and causing a wave of joy throughout the Arab world during this historic World Cup hosted in The Middle East.

Ronaldo, the legendary 37-year-old footballer who has achieved tremendous success in the sport, was held out of the starting lineup for a second consecutive match. However he made an impressive entrance as a substitute at the 51st minute mark and electrified his teammates with support throughout play.

Despite five Ballon d’Or awards, the celebrated footballer failed to reach a single World Cup final in his career.

In the upcoming semi-finals, Morocco will face either France or England.

This is a landmark moment in football as an African nation has finally broken into the ranks of European and South American teams that have typically dominated the World Cup stage.