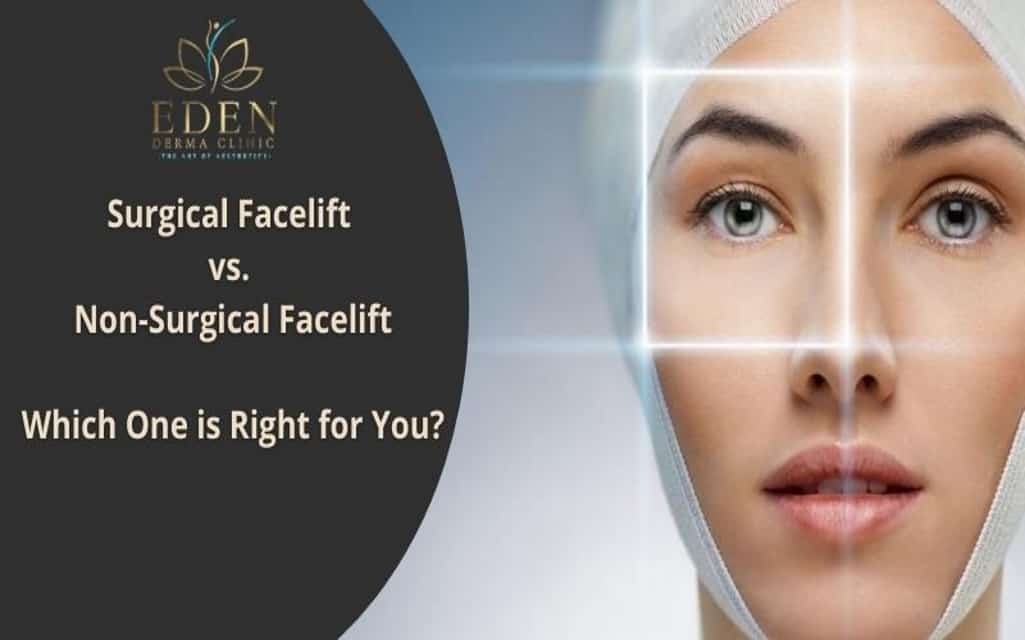 You might have seen so many celebrities whose faces always look fresh and wrinkle-free, but they always claim that they never went under blade. Well, it could be possible that they might never go under the knife but still performed their face surgery. How could it be possible? Are there any non-surgical treatments to lift the face? And how can this treatment be conducted for a facelift?

According to a 2019 survey, Botox ranked on the top amongst all cosmetic treatments and approximately 8 million injections were sold, which is still the highest number to date. Nevertheless, today many women are moving towards non-invasive treatments because of several reasons.

In the end, I would suggest which one is right for you to help you make a suitable decision.

A facelift, also known as Rhytidectomy, involves either a surgical or a non-surgical process to lift and tighten your facial tissues. A facelift procedure involves removing or accessing skin, flattening and folding wrinkles, and tightening facial tissues. Although the eye is part of the face, it does not do anything with your eyes or brows. Notwithstanding, facelift emphasizes the bottom of the face such as jawline, cheeks, chin, and often neck.

There are various reasons people get their facelifted, and the most common reasons include:

A surgical facelift is also known as traditional facelift surgery, which involves a procedure of lifting the loosened skin and tightening the facial muscles and tissues. In this process, your face is carved in a particular shape, and all additional skin is removed by cutting it. Then, the cut area is stitched and dressed to provide an entirely new face shape and contour.

Since surgery is involved in this treatment, you would experience some pain, bleeding, and swelling for three to five days once the surgery is done. However, it would take approximately two to three weeks to heal the wound. And after some time, you would get your all-new face shape.

A traditional or surgical facelift can take you in an anti-clock direction with your appearance, and you would get back to your younger days. Have a look at some benefits of a surgical or traditional facelift.

Where you get plentiful advantages of a surgical facelift, at the same time, there are some drawbacks to this treatment.

A non-surgical facelift is an amalgamation of non-surg ical and very least surgical procedure which is done to revitalize and freshen up your facial looks. As compared to traditional facelift surgery, non-surgical treatment is considered to be more comfortable and affordable. This procedure does not involve hospitalization, anaesthesia, or cuts and bruises. However, in this procedure, patients need to spare a small amount of time from their schedule and get their facelift.

Along with various benefits of a non-surgical facelift, you may encounter only a few drawbacks such as:

Which One is Right for You?

To know more, head to our FAQs to eliminate your muddles.

1.  How long does a non-surgical facelift last?

Typically, a surgical or traditional facelift treatment goes durably for ten years or so. However, if you execute a non-surgical facelift, it remains only for two years, and you need to get regular touch-ups to maintain this treatment.

2.  What is the ideal age to get a facelift?

Facelift treatment is done to eradicate all wrinkles and loosened skin from the face, and usually, people get their facelifted in their mid-40s for best results. Thus, the ideal age to get a facelift depends upon your face condition. Most people perform facelift surgery from the 40s to 60s to get their skin tightened.

3.  Does a facelift remove my wrinkles?

A facelift is a great way to get rid of all wrinkles and deep creases from your face. A facelift has to do everything for your jawlines, heavy droops, loosened skin, and wrinkles. It makes your skin look younger and fresh.

How to Find the Best Face Wash for Dry Skin

Why Do Men Lose Their Hair?

What Are The Benefits of Hair Extensions

The Big Differences Between MCT Oil and Coconut Oil