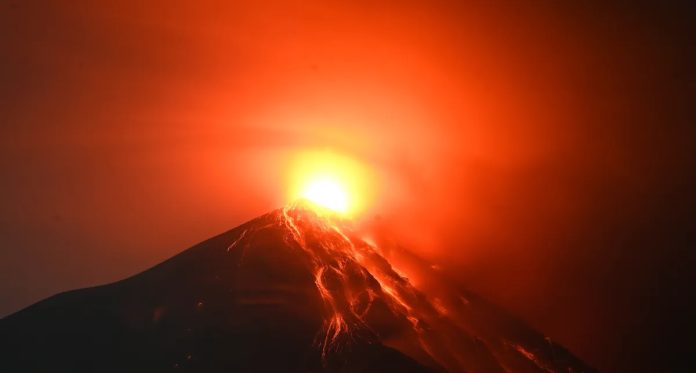 On Sunday, Central America’s most active volcano once again erupted with a spectacular display of lava and ash, prompting the closure of Guatemala City’s main airport and nearby highway.

Fuego, Spanish for “fire,” erupted once more on Saturday night and sent molten rocks cascading down its slopes while clouds of ash billowed into the sky. Even 35 kilometers away in Guatemala City, these winds carried a reminder of Fuego’s fiery presence.

This morning, the Civil Aviation Authority declared a temporary closure of La Aurora International Airport, located 6 km south of Guatemala City. This decision was made after ash particles were noticed on and near the airport’s runways; as such, two flights had to be redirected accordingly.

At noon, the airport re-opened as gusts of wind changed direction and blew away all remnants of ash from the vital facility.

Cautiously, highway officials blocked the roadway between southern and central Guatemala. However, after the volcano showed signs of calming down, they reopened it on Sunday afternoon.

Rodolfo Garcia, a Civil Protection representative, affirmed that the government is keeping an eye on the latest volcanic eruption and no one has been required to evacuate thus far.

Jose Sol, an Alotenango resident, stated that the authorities are now more alert and proactive compared to last year’s events.

On Saturday night, the local inhabitants of this area were met with a surprising lava flow and an eerie red sky. “We’re rather accustomed to these kinds of occurrences,” Demetrio Pamal (age 28, indigenous farmer) told AFP. To us locals, it’s simply seen as part of our everyday life.