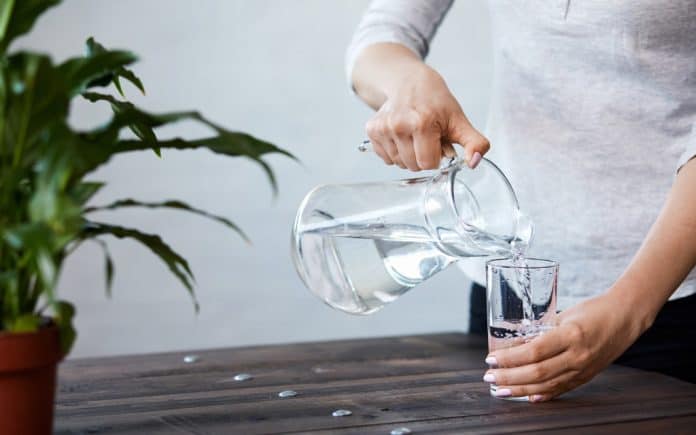 The long-standing recommendation to drink eight glasses of water per day may not be entirely accurate. For some people, two liters (about 8 cups) is simply too much water to consume in a single day.

A new study has found that the average person only needs 1.5-1.8 liters of water a day, less than the recommended two liters according to an article from British Newspaper The Guardian.

“There is no scientific basis for the claim that everyone should drink 8 cups of water a day,” said Yosuke Yamada of the National Institute of Biomedical Innovation, Health and Nutrition in Japan. He continued by saying that “most scientists are unaware of where this suggestion originated.”

According to the British newspaper, one of the problems is that previous estimates of human water needs ignore that our food contains water. This means that a large proportion of our total consumption can come from the water in our food.

As Yamada points out, “If you consume a variety of water-rich foods throughout the day–such as meat, vegetables, fish, pasta and rice–you can easily get 50% of your daily recommended water intake.”

Furthermore, the research team evaluated the water consumption of 5,604 individuals aged 8 days to 96 years old from 23 nations. Findings from the study were published in Science journal.

As the study showed, Temperature and humidity levels, as well as altitudes play a significant role in how much water an individual needs to drink. The recommended intake is also increased for athletes, pregnant women, and those who are breastfeeding.

Young men aged 20-35 have an average water “circulation” of 4.2 liters each day, which gradually decreases with age; for those in their 90s, the rate is 2.5 liters on average (depending on how active they are).

The “circulation” rate of water in the bodies of women aged 20 to 40 was 3.3 liters, but upon reaching 90 years old, that number decreased to 2.5 liters.

Professor John Speakman, a co-author of the research from the University of Aberdeen said that most people probably drink too much water. The commonly accepted amount of 8 glasses, or two liters, is likely excessive.

While there is currently no research supporting any harm from consuming higher amounts of water, the British newspaper argues that obtaining safe drinking water can be expensive.

Is An Indoor Water Feature Good For Your Home?