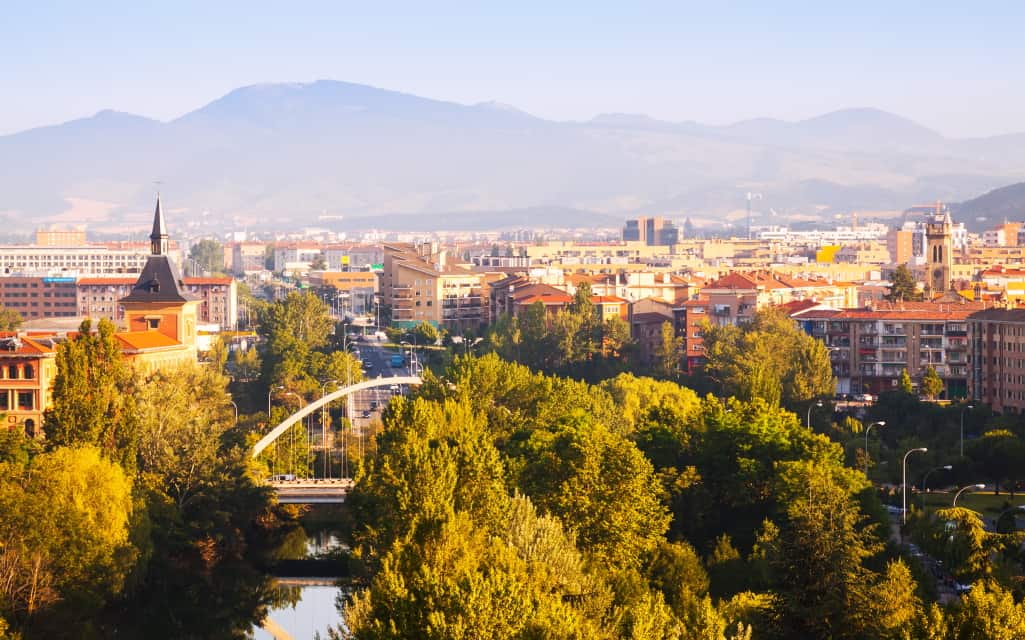 Being home to the independent-minded Kingdom of Navarra and the place where the famous Running of the Bulls festival takes place, Pamplona, Spain is an incredible place to visit. As wildly exciting as that event is, there is far more to this town than running bulls. From old citadels, to bustling town plazas, to picturesque gardens, there is plenty to see and explore. Here are the top five sights to visit in Pamplona, Spain.

Also known as the “New Castle” in Pamplona, a star-shaped citadel constructed during the Renaissance, Ciudadela de Pamplona is an impressive feat of architecture worth seeing.

When Pamplona ceased being used by the military in 1964, the old military buildings in the town became transformed into public parks. Today, there are art exhibits and concerts within its thick citadel walls. If you happen to visit Pamplona in July, you will have the opportunity to see the San Fermin nightly fireworks competition.

When visiting Pamplona, Spain, you have to head over to its lively main square, Plaza del Castillo. This is the center of the town’s social life, so much so that locals call it the “living room” of Pamplona.

Enjoy the beauty of Renaissance-era architecture surrounding the Plaza. You will find plenty of charming cafes and elegant 18th century buildings with outdoor terraces. There are also concerts held during the summer at the center of Plaza del Castillo. Any tour of the Old Town should start at this heart of Pamplona.

Just west of the old city lie the Taconera Gardens. The grounds make up the oldest and most iconic park in Pamplona. These beautiful French-style gardens feature long paths dotted with deciduous trees, flowers, and manicured hedges. Besides several kinds of sculptures throughout the park there, you will find an impressive arch greeting you at the southern side of the gardens. This monument was erected to pay homage to the locally-beloved 19th century tenor Julián Gayarre.

There is also a small zoo on the grounds, showcasing peacocks, pheasants, swans, deer, and ducks. You will have the opportunity to see some of Pamplona’s old walls, along with magnificent views of the Arga river. The views continue with far-reaching sights of the Pyrenees Mountains that border France.

This 600 year-old cathedral is a sight to behold. The Pamplona Cathedral has a rich history that started out as being the center of the ancient Roman town of Pompaelo. Archaeological digs have uncovered streets and buildings from the 1st century BC. A previous cathedral sat in this very spot until it was destroyed by the Moors. Between the destruction of the original cathedral and the present one, two more cathedrals were built, both of them collapsing.

The current cathedral has withstood the test of time and is an iconic architectural marvel. An outstanding part of the cathedral is its cloister. Dating back to the 1200s, this temple was designed in the vein of French Gothic architecture. Inside, you will find a 600 year-old sculpture of the Virgin Mary, along with an associated collection of sculptures.

To see a Gothic church hearkening back to the 12th century, you have to visit Iglesia de San Nicolás. This church features a reinforced watchtower, complete with turrets. There used to be three towers, but an intentional fire destroyed the old building that was at this location.

Its thick walls and military-style turrets are because it used to also be used as a defensive bastion against hostility from neighboring buroughs. Today, it is a peaceful place housing Pamlona’s largest organ. Its location also places you right within the center of the old medieval city. It is here that you will find plenty of traditional shops and handicraft centers to find a taste of the local culture.

Be Part of a Tour

You can save a good amount of time trying to figure out what to see in Pamplona, Spain by being part of a tour. Whether you get a pre-packaged tour or work with a local tour operator in the area, you will allow your trip to be more enjoyable. Besides that, a tour will show you the best that Pamplona has to offer with the convenience of coordinating everything for you. See the top 5 sights to visit in Pamplona, Spain, as well as others, in a way which will offer you maximum enjoyment of them.