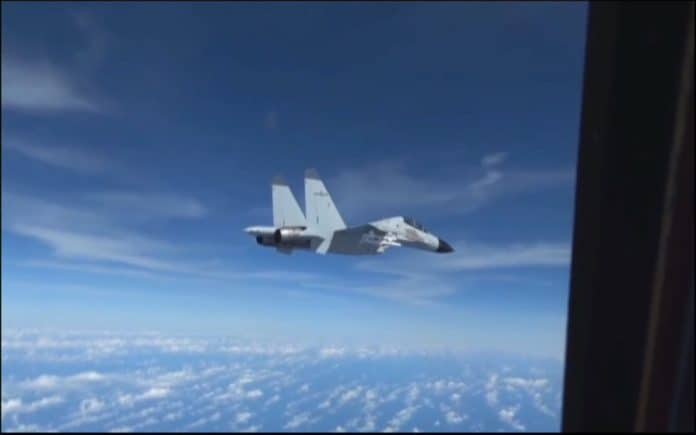 This Thursday, the US military announced a near miss between one of their aircraft and a Chinese fighter jet in the South China Sea. The two planes were reportedly flying only meters apart from each other when they narrowly avoided collision.

On December 21, a Chinese Navy J-11 fighter pilot executed an unsafe maneuver as he flew near a US RC-135 aircraft, according to the US Indo-Pacific Command’s statement.

In a stunning display of aerial acrobatics, the Chinese pilot flew less than 6 meters in front of an American reconnaissance plane, requiring that aircraft to take evasive maneuvers and avert potential disaster. The incident was confirmed by US Army officials.

The RC-135 was legitimately carrying out regular operations over the South China Sea in open sky, as reported by US control.

China has recently resorted to acts of aggression, according to AFP. With this in mind, it is imperative that we take steps now to avoid such a collision from occurring.

On Monday, the Taiwanese Ministry of Defense declared that China had deployed 71 warplanes near Taiwan last weekend as part of its military exercises. Notably, the exercise included a staggering 60 fighter jets in one day—one of China’s largest displays of air power yet.

On Sunday, in a statement released by the Chinese army, it was declared that military drills were conducted near Taiwan due to perceived “provocations” and an alliance between the United States and this self-governing land.