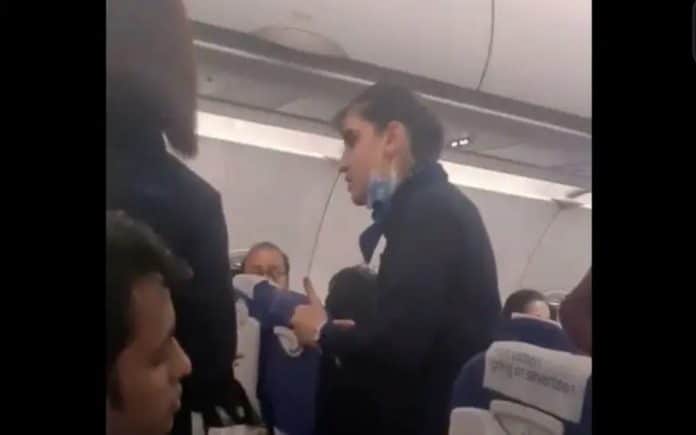 Millions of social media users expressed solidarity with an air hostess who was disrespected by a passenger, leading her to vociferously declare that she is “not his maid!”

The video which swept across social media and became a viral sensation was reportedly taken during an Istanbul to New Delhi flight, as reported by the Indian Express newspaper.

After the video spread, the CEO of the airline Indigo, yesterday, Wednesday, expressed his support for the air hostess who was seen in the clip that was filmed by a passenger and watched by millions on social media, arguing fiercely with a passenger, and telling him that she is “an employee and not his servant.”

The company’s president reminded us in a tweet on Twitter, “Remember that the flight crew are people too.”

On December 16, a passenger became irate due to dissatisfaction with the in-flight meal service. One flight attendant attempted to explain the regulations calmly and politely; however, this individual’s rage escalated until it was too much for her – resulting in raised voices on both sides.

Tempers soaring even mid-air: “I am not your servant”

An @IndiGo6E crew and a passenger on an Istanbul flight to Delhi (a route which is being expanded soon with bigger planes in alliance with @TurkishAirlines ) on 16th December : pic.twitter.com/ZgaYcJ7vGv

In the video clip, where the passenger’s face was not seen, there were two arguing and their voices escalating as they spoke. The flight attendant said to them “My colleague erupted into tears due to your conduct.” To this comment, the passenger roared back in response: “Why are you yelling? Don’t raise your voice!” She then replied with a retort of her own: “I’m yelling because that’s what you did!”. They kept going until finally concluding with one side firmly saying “Shut up!” and being answered sternly by the other party shouting “You shut up!”

While one of the flight attendants attempted to assuage the situation, another angrily remarked: “I apologize sir, but your manner of speaking with our crew is inappropriate. I am listening to you politely and cordially; however, please remember that we are here as employees and not to serve you.”

In response to the incident, Indigo stated that flight 6E 12 had encountered an issue with regards to certain passengers’ meal choices.

She went on to emphasize that their top priority is meeting the demands of customers and delivering pleasurable experiences. As they assess this unfortunate episode, she assured them that passenger satisfaction has always been a fundamental part of their operations.

In an outraged tweet, the company’s president declared: “It had clearly reached a boiling point that led to what happened. Over time, I have witnessed airlines crews being subjected to beatings and insults – they were treated as servants or worse.”