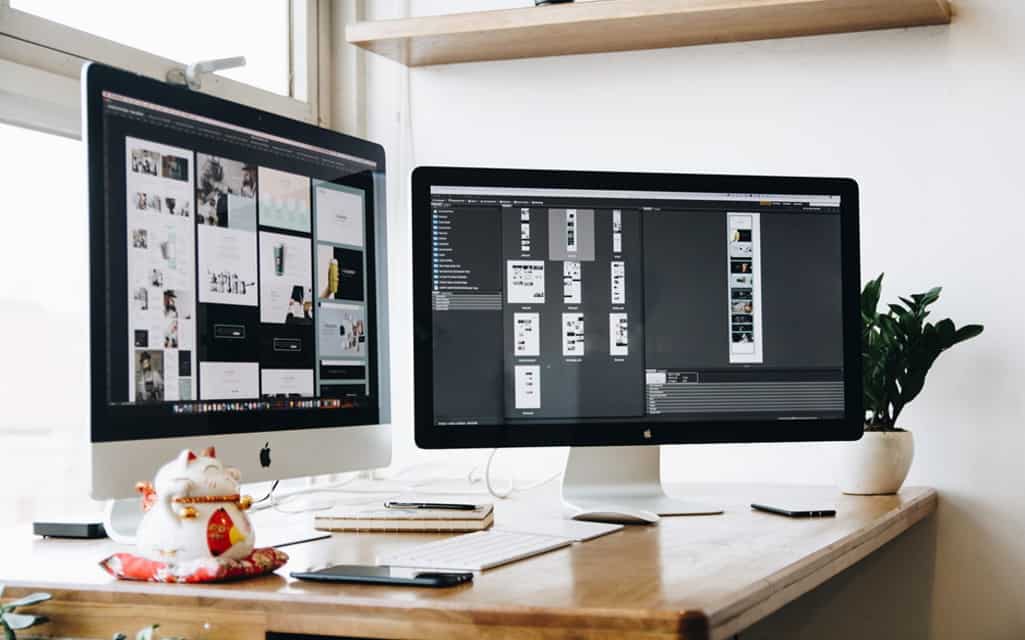 Did you ever dream of the day you would have lots of monitors around your desk? Were you ever impressed walking past those desks at work that had maybe 4 or even 6 monitors? Some years ago, having multiple screens gave you such status at work. Whether you are a programmer, engineering designer, data analyst or trader, the ultimate goal is to have at least a 6 monitor setup. Today, technology and access to IT is much more widespread but there are still great advantages to having multiple screens.

Interestingly, it was Microsoft who launched the concept of 2 screens with their Windows 98. They developed the right graphics cards and drivers to support the setup. As you can imagine though, in those days that was a big investment. More than 20 years later and a 6 monitor setup seems like the most natural thing in the world. Even better is that today, Windows has made it even easier than ever before to have a 6 monitor setup.

Why Use a 6 Monitor Setup?

It’s interesting when you consider that studies now show that no one can multitask successfully and yet, having 2 screens improves productivity by 25%. This is according to a report done by Fujitsu Siemens Computers in 2017. The report also showed that 3 monitors boost productivity by 35.5%. At some point though, too many monitors create more distractions than support, however, it also depends on your job.

Day traders have multiple markets to constantly track and follow. This means that they’re constantly glancing at multiple graphs and researching information. All of this is much faster and easier with multiple screens. When day trading, time is of the essence and even the action of flicking between screens is too slow. That’s why a 6 monitor setup is so useful for day traders.

If you look at programmers or engineering designers working then you’ll find that they often use multiple systems. They might be coding on one side, creating a CAD drawing on the other side and pulling it all into a system overview on yet another screen. It’s true that not all of us are designers though. However, perhaps you need news and other sources of information on one screen such that it’s all kept separate from your communication tools and apps. The other screen will again be your main workspace. Of course you can keep expanding this concept to fit a 6 monitor setup.

If you take day traders again, they’ll often need to track several graphs of data at the same time. It’s much easier to have them all open at once across a 6 monitor setup. However, perhaps you can also imagine a lawyer reviewing and comparing multiple documents. Again, this would be so much easier with a 6 monitor setup. It can get a bit overwhelming and exhausting to keep flicking between screens. Moreover, minimizing screens can be a strain for the eyes.

Your 6 Monitor Setup in Windows 10

The first step in putting your 6 monitor setup together is deciding your layout. Do you want all your screens in landscape view or perhaps a few that could be in portrait orientation? Once you’ve decided, you need to make sure that you have all the necessary cables to connect the monitors to each other and to your central computer or laptop. This can be either through VGA, DVI or HDMI cables although the latter is more common, especially when it comes to Windows. Another absolute must is a graphics card, although this is usually built into your computer or laptop.

Once everything is physically connected, then simply go to Start – Settings – System – Display. Your computer should naturally detect all the monitors but if, for some reason, it doesn’t then press Detect. You can also choose to rearrange your Display and then Detect again.

Once your monitors have been detected and are displayed on your screen then you can rearrange your layout if you wish. You can do this by going into Scale and Layout and choosing the best Display Orientation for you.

Concluding thoughts on a 6 Monitor Setup in Windows 10

Considering how much you get out of a 6 monitor setup, and some of the technology behind it, it’s amazing how simple it really is to set up. You can create your own control centre in no time at all by just making sure you have the right equipment and cables. After that, most of the work is done by your computer. Then, it’s just a matter of having the right strategy and you’re off with whatever your plan is for your beautiful 6 monitor setup.

How to Update Graphics Drivers on Windows 10