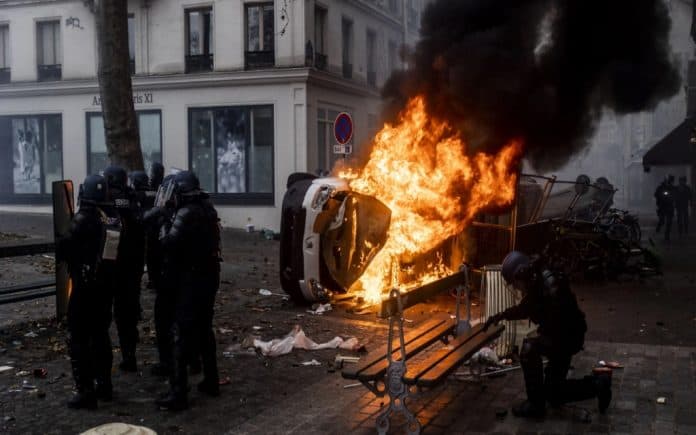 On Saturday, December 24th 2022, Paris was in the midst of a second-day uprising between law enforcement and individuals from the Kurdish community after three Kurds were tragically slain by an armed assailant the day prior.

During the riots, multiple cars were flipped and one was set ablaze. Furthermore, store windows shattered while small fires smoldered next to Republic Square – a focal point for rallies in the city.

Paris police chief Laurent Nunez said the protest had suddenly turned violent, but it was not yet clear why.

Thousands of people took to the streets in #France for the three Kurds murdered in #Paris yesterday.

He added, in remarks broadcast by BFM TV news, that a few dozen protesters were responsible for the violence, and said that the police arrested 11 and about 30 were slightly injured.

The clashes occurred when some demonstrators left the square and threw things at the police, who responded by firing tear gas. The skirmishes lasted nearly two hours before the protesters dispersed.

On Friday, a gunman filled the 10th arrondissement of Paris with terror as he systematically killed victims at both a Kurdish cultural center and neighboring cafe. As citizens in the community prepared to commemorate ten years since three female activists were murdered without justice being served, they were struck by this harrowing act of violence.

Police arrested a 69-year-old man who authorities said had recently been released pending trial over a knife attack at a migrant camp in Paris a year ago.

🔴PARIS :#VIDEO MOMENT WHEN THE KILLER OF 3 KURDS CAUGHT BY PEOPLE IN THE KURDISH BARBERSHOP IN PARIS 10em !

After questioning the suspect, investigators added suspicion of a racial motive to the initial charges of murder and gun violence, the prosecutor’s office said Saturday.

In a later affidavit, the office said it halted the interrogation for medical reasons and transferred the man to a psychiatric unit.

He also added that the suspect will be presented to an investigative judge when his health condition allows.

The killings came on Friday, just before the anniversary of the killing of three Kurdish women in Paris in January 2013.

The investigation was closed after the main suspect died shortly before he was to stand trial, and then reopened in 2019.

Road Tripping in France: What to Know