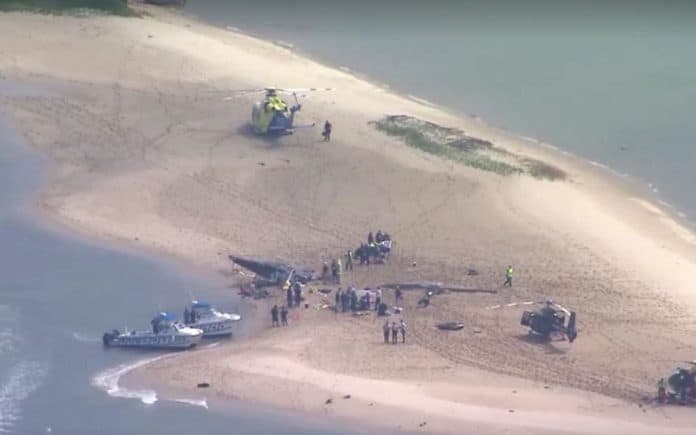 A midair collision between two helicopters near the popular tourist strip of Main Beach on the #GoldCoast, south of #Brisbane, killed four people and critically injured three others on Monday at 2 p.m., according to authorities in #Australia. pic.twitter.com/JktZGolCyM

Worrell also made it clear that three other people are “in critical condition” and are receiving treatment in hospital, noting that the dead and injured were on board the same helicopter.

Consequently, both police and eyewitnesses verified that the crash happened when one helicopter was attempting to land as the other was preparing for take-off.

Earlier, the county ambulance service said that the accident resulted in 13 injuries, while it did not immediately confirm the presence of deaths, according to the Associated Press.

3 believed to be dead, with 2 others injured as two helicopters collide near SeaWorld on the Gold Coast. .#Southport – #Australia #GoldCoast #helicoptercrash #helicopter #crash #seaworld #goldcoast pic.twitter.com/UzpxmVTGse

For his part, Angus Mitchell, chief commissioner of the Transport Safety Bureau in Australia, said that an investigation has been opened into the incident.

The 6 best spots in Australia for every kind of sporting...