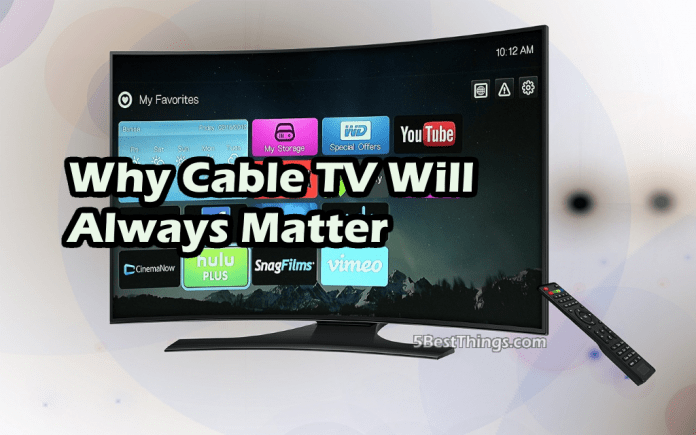 When television was broadcast only with antennas, viewing options were very limited. Most homes could only pick up four or five stations. In time, cable and satellite TV came along, creating endless viewing possibilities, and most consumers thought there was no way it could get any better.

Then it did. Internet communication arrived and made it possible to get lots of content online, and the offerings became even broader with smart TVs that could combine high-speed internet plans with large screens. Internet speed is so high now that the picture and sound are remarkable, right on a level with high-definition TV.

For some, this was the death knell of cable television. Nobody was going to watch it anymore because all these other options allowed them to tailor their viewing to their exact tastes and ignore everything else. With so many amazing apps for entertainment, who needed to sit down in a chair and pick up a remote?

Yet here we are, several years past the information revolution in TV, and cable TV remains. What has allowed it to persist and thrive even as so many people have written it off as a dinosaur? Perhaps the most important point to note is that the two mediums are not entirely competitive but complementary, meaning there is a place for both at the entertainment consumer’s table. So let’s look at the part of the equation best solved by cable TV.

It’s a time-honored tradition to flip through the channels, looking for something engaging. On-demand viewing typically involves watching or binge-watching shows you already know you like.

Just as we must turn on the radio to find new music, we must turn on the TV and look around to discover new shows. Many of us end up big fans of shows that are broadcast on networks we might have never watched, so we will always benefit from having a wide array of diverse cable networks just to find out what kind of great ideas are hitting the airwaves.

Sometimes being passive is best. While it’s amazing that we can use a phone or tablet to immediately bring up a 20-year-old rerun of our favorite show or to catch a live sporting event from another country, it’s also helpful just to have a news or weather network turned on at work or home, ready to signal for our attention when a breaking event happens.

Sure, social media and internet news sources will carry all the same content, but it takes something to draw our attention to those sources. We can’t spend the whole day flipping through news sites to see if something major has happened. We have to have a semi-alert ear towards a news outlet that’s always talking to us.

Online entertainment is constantly changing. There are new interfaces, different content offerings, and various login methods that get us to the programming we want. For the less technologically savvy–of whom there are still millions–it’s a necessity that news and entertainment are available via simple, tried-and-true methods. No matter what other devices we place in our hands, the easiest one is still the TV remote control.

This is also true of the location, not just the operator. What hospital waiting room, restaurant viewing area, or hotel lounge would be complete without a TV going, broadcasting sports, news, or weather? Is there any more iconic movie scene than a crowd gathering outside the electronics store to watch the story’s climax on a wall of dozens of floor model televisions?

Cable TV has certainly changed with the evolution of the internet, but it’s not going anywhere. It still carries too many advantages over its counterpart to become obsolete. In the decades to come, it’s clear that these two technologies will work hand in hand to provide the information that viewers of all kinds are searching for.