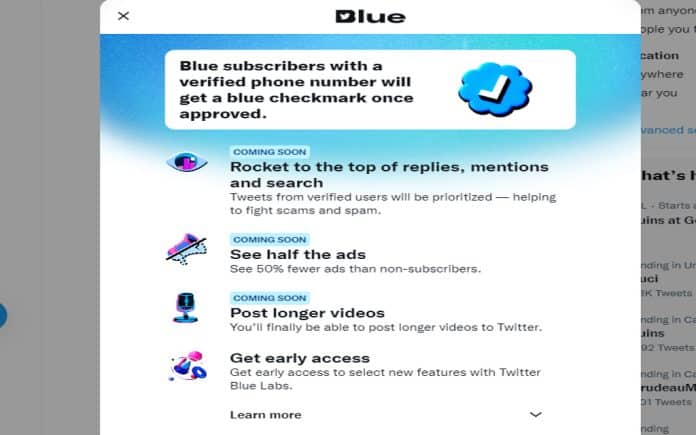 This Monday, Twitter will relaunch its subscription package that grants users the opportunity to get access to a blue verification badge for only $8.

Announcing the re-launch of Twitter Blue, a subscription service that offers access to exclusive features for just $8 monthly or $11 for iOS users!

Furthermore, he commented that the service provides users with access to features intended for subscribers, most notably the blue authentication mark.

The source outlined that after successful verification, the user will be awarded with a “blue mark” as validation.

For corporate accounts, the blue tick will turn a golden color. On the other hand, official and government establishments’ ticks remain a gray color.

Subscribers will benefit from the ability to not only upload high-quality videos but also edit their tweets after they have been shared.

Following the acquisition of “Twitter” by Elon Musk, this service was launched a few days later. However, it didn’t take long before several accounts started to impersonate well-known individuals and companies with the blue mark verification badge – prompting an immediate suspension of the service upon discovery.

Last November, Musk had promised to revive the much-anticipated “Twitter Blue” service soon. However, shortly afterwards he announced that its launch would be delayed for an unspecified amount of time.