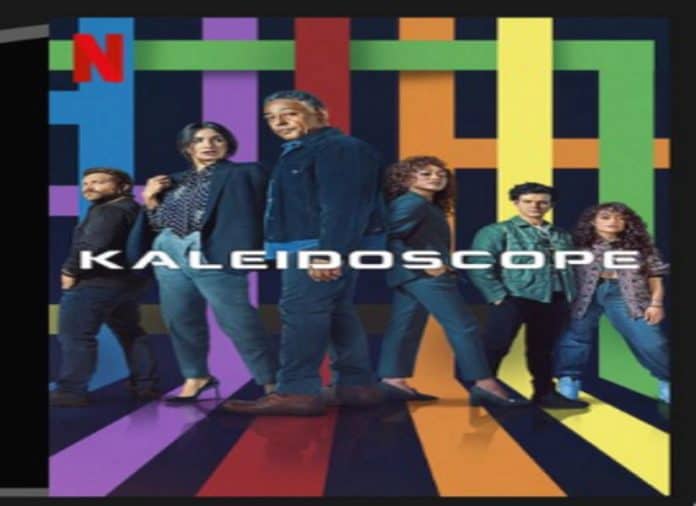 Imagine having the choice to determine the order in which you’d watch episodes of a series. Your decision would ultimately depend on how much suspense and enjoyment you felt with each episode, instead of being told by creators what should be watched first. Would this prompt your curiosity to experiment or is it best for someone else to decide?

This is incredible! #KALEIDOSCOPE is #1 in the country!

Thank you to everyone who has watched it. This is a special project that I had the best time being a part of and your support truly means the world. pic.twitter.com/jVrlSB4g2H

In 2023, the thrilling and enthralling Netflix series “Kaleidoscope” unveiled an intriguing hypothesis with remarkable consequences. This was a unique kind of drama that captivated audiences around the globe!

There is no correct order

After two decades of meticulous planning, the long-awaited execution of a heist is finally underway in “Kaleidoscope”, an action-packed and suspenseful American drama.

This TV show consists of 8 episodes, all identified by colors (red, orange, yellow, green, blue, white pink and purple) plus titles that follow a chronological order in regards to the history behind the theft.

I came up with a bunch of different orders to watch Kaleidoscope in so you don’t have to pic.twitter.com/FE6IiwjzM9

Netflix incorporated a unique aspect for their project that allowed viewers to watch episodes of the series in any order without compromising how much they enjoyed the plot or timeline sequence. Most importantly, no crucial events were spoiled and surprises were kept intact while giving people something new to look forward to every time!

Netflix ingeniously chose to randomly showcase the first seven episodes of the series depending on each user’s specific account, with its final episode “White: The Day of Theft” granting viewers a chance to stir things up and freely jump between episodes according their own will.

Nevertheless, some viewers began to develop different viewing regimens based on the type of tension that they preferred for twice the pleasure. For instance, if theft is featured as the finale episode then it’s recommended to watch in this particular order:

The only order that makes sense #Kaleidoscope pic.twitter.com/uLCoIrrMcT

The creators of the series created a storyline that wouldn’t vary with regards to the ending, regardless whether or not theft was part of it. Despite this garnering much attention and effort from viewers, it didn’t result in an exceptional work – merely one which is intriguing and energetic but still considered ordinary on both a technicality as well as dramatic level.

The reception to the series was quite varied among both audiences and critics alike. As stated on IMDb, it received a rating of 6.9 points while Rotten Tomatoes reported 50% positive reviews. Additionally, it managed to be one of the most watched dramas in America – ranking first!

Fans of the work laud its hidden secrets, entertaining puzzles, vibrant visuals, and most importantly the unique viewing experience that kept them engaged without causing exhaustion. Its strengths are rooted in what it was built on: an unprecedented combination of above-mentioned features that created a one-of-a-kind journey for viewers.

As viewers are tempted to break the rules and manipulate the way episodes unfold, technology ensures that these changes can be made swiftly – making it a more exciting and enjoyable experience. Every alteration impacts viewer loyalty towards characters as well as their outlook on what is occurring on-screen; this makes for an enthralling journey every time!